Today’s post from Sam Mahlstadt is part of the blog series Discipleship: Re-Imagining Our Calling From Christ. To receive future posts from the series in your inbox head HERE. Engage with the writers and community of readers using the hashtag #DiscipleshipBlog.

I love to write. In fact, I experience deep fulfillment and joy when I am working on a book, article, or post much like this one. I firmly believe God planted the passion within me, but I haven’t always felt that way. For a while, especially as I was attending the University of Iowa to pursue writing and felt puller toward vocational ministry, I wrestled with how my interest lined up with what God was up to, as I couldn’t seem to reconcile my work with his work. But I’ll never forget a conversation I had with my uncle and pastor, when he told me that God plants desires within us, and then uses those desires to draw us to him and his work in and through our lives. It was a relatively casual observation, but proved to revolutionize my faith and work.

It was discipleship in its purest form – leading someone into the freedom found in living their life in response to God.

I was given this advice while I made my living in church ministry, which was an absolute gift. It allowed me to see how I could uniquely contribute to both the local community I served, as well as the Church at large.

But then I went through a significant change when I transitioned from ministry to the workforce. And not just any job, but a position in the banking/mortgage industry. It was a move from the church to the Empire. Throughout scripture and church history, we repeatedly see the Empire with its boot on the neck of those within its control. 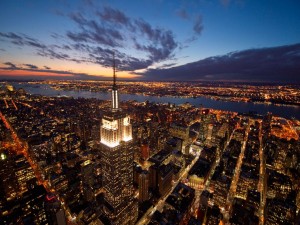 For those reading this who reside in the United States as I do, we live in the most powerful Empire in the world’s history. And I spend a good portion of my day working in the mortgage industry, at one of the nation’s largest banks. You could say that I work in the very heart of the Empire. But I’ve learned more about making disciples within the Empire than I ever did within the church.

Within the heart of the Empire, I’ve witnessed the undying focus on bringing people into the fold, developing them, and setting them loose on a common goal (which sounds an awful lot like discipleship, does it not?) in order to achieve success in a market. If the company I work for us going to continue to be successful, it will only because they consistently initiate, train, and equip their people. There are millions of dollars and entire departments of well-paid folks allocated to this effort. They have spent thousands of dollars directly on my development and countless more indirectly.

While career development and discipleship is not an apples to apples comparison, we can at least learn from the intentionality with which the marketplace pursues development. It’s a well known fact that employees who are engaged in their careers make companies stronger. The more an employee feels cared for, protected, challenged, and equipped, the more likely they are to represent the company’s vision and values. And isn’t that precisely discipleship – helping followers of Christ feel cared for, protected, challenged, and equipped, so that they can carry the faith forward?

While some churches take serious the call for disciple making, it all to often begins and ends with corporate gatherings. And while we know Sunday morning worship services are a part of the process, discipleship really happens in the context of relationship. It’s precisely why the conversation with my uncle was so revelatory. It happened in the context of relationship and trust. It wasn’t one man expounding to a large crowd, it was someone I trusted speaking to me. It is no wonder, then, that we often see Jesus dispelling and escaping the crowds so that he could commune with his disciples. And from encouragement to criticism, Jesus made many opportunities for teachable moments within their context of relationship.

While the Empire understands time and resources spent on developing people is a critical investment, they don’t have is a life changing message. And the Church’s interest goes beyond developing more productive people. The Church develops new people.

Discipleship in the context of community creates new neighbors, neighborhoods, and a new humanity. Which means, of course, the local church should be pouring her resources into making disciples. We should be writing series of posts like this, books, and resources on the topic, and helping people learn how to develop into followers of Christ and lead others to him as well.

While I’m honored to lend my perspective to this conversation, it serves as a reminder that more of my life needs dedicated to this work. I pray God holds my attention here beyond this series. It’s critical for my faith, and for yours as well.

Sam Mahlstadt is compelled by the written word and the story of the Gospel. He writes at creativetheology.com, and released his first book, Creative Theology, last year.