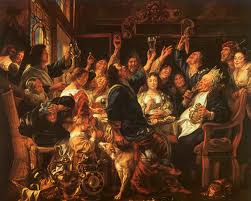 Back when I first started blogging I shared my favorite links each week in a post titled Fortuitous Bouncing. How many of you remember those days? Life has gotten busier and I don’t have the time to put together a great list each week, but every few months I’ll put together a post highlighting what I’ve been reading, watching, and listening to (here’s the last one from December).

What have you been feasting on?