Social media means a lot of things to a lot of people. What it means for me doesn’t necessarily work for everyone else. However, I do think I have a decent grasp of how many view it though, so hopefully my thoughts are helpful in that way.

I have 3 examples that I’ve seen in the past few weeks that have me wondering what the real value of social media is. I’m beginning to wonder if it won’t get taken over by people who are just out to get numbers, not relationships, and out to promote themselves before engaging with others.

To me this is just pure manipulation. It is under the guise of “helping” other people get noticed, but really it is all about this person upping their numbers.

Since when was it “normal” to be a pastor and follow Twitter accounts like these? I know the reason is that the pastor auto-follows anyone who follows him in order to save time and get more followers…but this shouldn’t be an accepted practice. And right now it is, because I could name over 10 “big name” pastors who do the exact same thing.

3. Yesterday I had a conversation with a Portland-area person who labels himself on Twitter as a “teaching pastor and entrepreneur,” as well as a few other things. I noticed that his Twitter account had a very large following and that almost all of his tweets were information and that he rarely, if ever, responded to people he followed or people who @ replied to him (tried to start a conversation with him). We talked a little about this (picture below of what he said to me about this, conversation is his response to my questions, starts at the bottom of the picture): 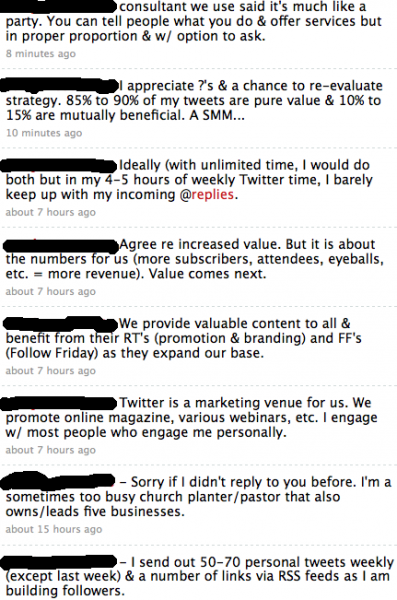 2 things stick out to me here: “it is all about numbers for us” and “value comes next.” And believe me, not everyone would say it, but a good majority of people on Twitter and who blog think the exact same way. Instead of taking time to write meaningful and valuable content they would just rather rig some way to get more people to notice them.

Social media, to me, has the highest value in these areas:

What things like the above examples turn social media into:

Manipulation, numbers focus, and selfishness seem very contrary to the Gospel to me. To me this is sad to see coming from 3 men who call themselves Christian leaders.

What do these 3 situations and examples say to you about social media?

What is the demise of social media?