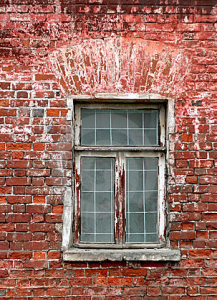 “Ordinary,” or the perception of it, isn’t quite good enough. God frowns upon it, because good Christians accomplish incredible things. Or so the message seems to be.

On some level I get the message. It makes sense. It’s not as if we should expect God to enter into our lives while nothing changes.

But is that what God desires from you and me? If you and I fail to do something seen as extraordinary in the eyes of many, have we failed?

I think a lot of us struggle with the weight of wanting to make a major difference in our world, but feeling incapable of even knowing where to start.

I’m positive I will never become the 2nd most powerful person in the world like Joseph, so what is my purpose if the extraordinary things in life are beyond me?

In Joshua 2 we meet a Gentile prostitute named Rahab. She’s a desperate woman who senses that the God of the Israelites is going to bring destruction on her hometown, Jericho. She takes this faith in God to its natural outcome: figure out a way to align with Israel instead of Jericho.

So she hides some Israelite spies, lies to the King of Jericho, negotiates a deal with the spies so her family will be spared from the coming war, and then ties a scarlet cord to her window so the Israelites will know which part of the city to spare.

It’s hard to imagine the Israelites conquering Jericho and entering into the Promised Land without the aid of Rahab. It’s likely the nation could have experienced another Numbers 13 situation.

But to read the story and believe that Rahab did extraordinary things is incorrect. Remember, Rahab was desperate, she had no other way out. She had a bad reputation in her town. She knew the God above all gods was on the side of Israel. So she did ordinary things. Last time I checked, tying a cord to your window isn’t exactly a heroic act.

In Favor of Ordinary

The incredible thing about Rahab isn’t so much her actions told in Joshua 2, it’s the way the rest of the Bible references her. James 2 describes Rahab as an example of lived out faith. Hebrews 11 lists Rahab among the most recognizable names in the Bible. Matthew 1 includes this Gentile prostitute within the genealogy of Jesus.

On one hand Rahab’s faith results in ordinary actions, but on the other hand God clearly sees Rahab as an example of extraordinary faith.

And the lesson at hand is clearly that God isn’t looking for you to go change the world, he just wants you to step out in an ordinary way.

Back in the late 1800s a woman named Therese struggled with the same thing most of us deal with. We desire to do great things, but we always seem to fall short. Before her death she wrote a memoir on her life and faith, and described the struggle in this way:

“Love proves itself by deeds, so how am I to show my love? Great deeds are forbidden me. The only way I can prove my love is by scattering flowers and these flowers are every little sacrifice, every glance and word, and the doing of the least actions for love.”

God shows up in the ordinary, the simple, the mundane, and he works through you, but his working doesn’t always result in what feels extraordinary, great, or incredible. He isn’t asking you to do things that cause heads to turn in your direction, he’s just asking you to steward your faith through ordinary actions.

So let’s pursue the ordinary, because doing so is an extraordinary act.

*If this topic interests you, listen to my message on Rahab’s ordinary faith and ordinary obedience*