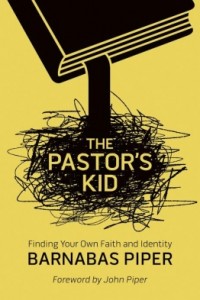 Barnabas and I have interacted together for a few years, mostly over our tortuous love affair with Minnesota sports teams. However, we also share another thing in common, we are both pastor’s kids; he being the son of a well-known pastor, John Piper, and me being the son of an unknown pastor who has been faithful to the call.

A few weeks ago Barnabas and I talked about his book, about growing up as PKs, and about how churches can better understand the situation pastor’s kids face.

You can pick up a copy of Barnabas Piper’s new book (it releases today), right HERE. You might even see a line or two from me in there.

TB: You are a pastor’s kid (PK) of one of the most well-known pastors in the world, but you’ve interacted with a lot of PKs who grew up in much smaller settings. Do you see differences between the PK of a mega church pastor, and the PK of a small church pastor?

BP: For sure there are some distinct differences. Most PKs can escape the shadow the church to some degree when they go away to college or branch out on their own. For me, especially working in an evangelical context like I have, that can’t really be escaped. I hear about John Piper pretty much every day.

On the other hand, every PK shares some distinct experiences and challenges. The pressures and scrutiny fit to scale, so they feel the same for the PK in a church of 100 or 10,000. The church I grew up in was mid-sized when I was young (300-500) and grew to over 2,000 by the time I graduated from high school. It’s now over 4,000. This has given me the chance to experience some of that sliding scale.

TB: In my experience, people tend to assume the worst when they find out someone is a PK. What often overlooked, but positive aspects of being a PK would you highlight?

BP: The biggest thing that gets overlooked with almost every PK is their uniqueness. God made us to be something, to be good at things, to have proclivities and tendencies. Too often all that gets ignored because people only see through the filter of “PK”. We get seen in that particular light, and breaking out of it can be hard.

The other big positive, I think, is that PKs are uniquely suited to serve the church (if they want to). We were raised in a ministry-intensive environment. This means we know the ups and downs of ministry, the variety of people and challenges the church houses, and the awesomeness and terribleness of vocational ministry. We have absorbed far more Bible than the average kid just by proximity, if nothing else. In all, a PK with a heart to serve the church is in a fantastic position to do so.

TB: In writing this book you interviewed a lot of PKs, including me. Did any of their experiences of growing up as PKs surprise you?

BP: The thing that surprised me most was the number of PKs, including you, who have gone on to serve in the church. That was part of what opened my eyes to all those unique blessings PKs have (see question 2). I expected to hear from a lot of jaded PKs who were washing their hands of the church, and there were plenty. But SO many have turned around and are devoting their lives to God’s church as pastors or committed servants.

On the negative side, nothing really surprised me. I heard from PKs with some horrible stories, and it was what I expected. Sadly, I was aware of how bad it could be for some PKs. I am just thankful those stories were not the norm.

TB: You’ve mentioned twice that PKs are in a great position to serve the church, and many go on to do so for much of their adult lives. My experience is that church members often want a PK to follow in those same footsteps as mom or dad. How can churches do a better job of giving space for PKs to serve within the church, without placing expectations that they follow the same path as mom/dad?

BP: I think that churches should put NO expectation on PKs to serve vocationally in the church. The ideal is for PKs to be seen as any other member of the church who has a desire to do what God has gifted him/her to do. That may mean a lay level of service in the church or a vocational role, but that should be somewhat that God brings out in the PK, not something he or she is pushed toward by members of the church. Rather than expecting the PK to serve at every service day, in the nursery, at VBS, and in door-to-door evangelism because he is the PK he should be invited to serve as a church member.

PKs are part of the church family, but not a special part with their own set of rules. They should have the same space that everyone else has so that God has space to draw, prod, lead, and call. And He will call some to pastor, some to marry pastors, and some to be business people, craftsmen, and artists.

TB: What is one thing pastors can do to provide a better environment for raising their kids within the church?

BP: Since you asked specifically about “within the church” I would say this: be a bold advocate for your kids. Fight for them. Don’t let people make PK jokes, heap expectations on them, or hold them to an unfair standard. Be vocal about it, and expect the same from your fellow pastors.

Your congregation needs to be led in this way, and your kids will appreciate it. It will open doors for you to connect with your kids at home too, because they’ve seen you go to bat for them and they know you are aware and care. It might ruffle some feathers and cause some friction, but all good leadership (especially leadership toward change) does that. In the end it will be better for your church and your family.