I wanted to share a recent conversation I had with Ed Underwood on the subject of God’s will with all of you. Ed is a pastor in the Los Angeles area, and in recent years he has been a great encouragement to me in person and through various online venues as I’ve started in the pastoral role. Ed just released a book entitled The Trail which follows the same subject as our conversation. Be sure to check it out.

Tyler: How has your perspective on God’s will shifted in recent years? 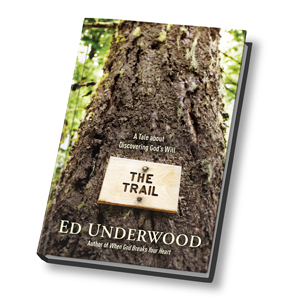 Ed: My perspective on discovering God’s will has shifted dramatically. As a young pastor and fresh out of seminary I was skeptical of any teaching on how to discover God’s will. I had tried to help so many believers who were trying to recover from horrible decisions based upon what I would call formula-Christianity. By that I mean the teaching that if you get it right by following these three steps, having these four experiences, or praying these words, then God has to show you His will. Then, over the years, I started feeling as if something must be missing. It seemed that if God loved me He would delight in showing me His will. Finally, I’ve been teaching the Scriptures expositionally for over 30 years. By expositional I mean going through the books of the Bible verse-by-verse. As I’ve been studying through the Bible I noticed a pattern. Often a verse that I thought I was familiar with, even a verse that I had memorized and used in discipleship, was actually a verse or a passage teaching us how to determine God’s will for our lives. One prime example would be Romans 12:1-2. Those believers who respond to God’s mercy by giving Him their lives will know His good and perfect will. As the pattern developed I set aside a folder in my files marked “God’s Will.” Eventually, I was able to categorize these verses and passages under eight principles. From that folder I developed a series on how to discover God’s will. I’ve taught the principles for years, in churches, at conferences, and in Bible Schools, Colleges, and Universities. It’s one of those series that people respond to dramatically and positively. I get responses like, “I never understood how to discover God’s will before.” So, I wrote a book presenting the eight principles, but decided to write a different book that stories the principles. Hence, The Trail.

Tyler: Your book is written in story-form, differing from how most pastors would choose to convey a specific perspective. What are you hoping the different format accomplishes?

Ed: The primary reason I decided to write this as an allegory is that I believe in the power of story. Most of us will remember a story far longer than we’ll remember the principle behind the story. I have it in my heart to write books that help everyday Christians follow the Lord Jesus. I’m so convinced that the principles I’ve discovered on how to discern God’s will in decision making will help people that I can’t stand the thought of them reading some boring Bible study and then, in the heat of the moment of facing a choice, forget the specific principle that would make every difference. This story thing must be special because it’s the way the Lord Jesus chose to teach. You never read of Jesus saying, “Okay, disciples. Sit down and I’m going to teach you the three reasons why you should read the Old Testament.” Story is life, and Christianity is life. The other reason is that it intrigued me. I have been messing around with writing fiction for years. I had about six chapters of fiction finished on a book I was writing for young men based upon my experiences as a wildland firefighter. Finally, I’ve often led a group of Christians on the same trek Sam takes the couple on in The Trail. It’s provided some awesome opportunity for mentoring because up there, in the high country, they’ve been dependent upon me in ways that have given me access to their lives. I’ve just seen the Spirit work of there because, as Sam says repeatedly in the book, “The high country humbles a person.”

Tyler: The age-old question everyone asks is how do you discern God’s will. How would you encourage people who are asking that question?

Ed: I would tell them that it all begins with relationship. The first step in discerning God’s will is to draw close to God. So, before you start looking for signs, putting out a fleece, go online, ask others, or even read a book, ask yourself this question: “Am I intimate with Jesus right now?” If the answer to that is no, then you can be sure of God’s will for your life: Rearrange your priorities and seek intimacy with Christ in community. Those believers who are intimate with Christ are the ones who will recognize His guidance when it comes. And, with my view of spiritual maturity, this will have everything to do with not only knowing God’s Word but also living in community. One of the constant threads of advice in the Scripture when it comes to discovering God’s will is to relate deeply not only to God, but also to His people.

Tyler: In what ways do Christians often think wrongly about discernment of God’s will?

Ed: The biggest and most damaging misconception people have about God’s will is that discerning it is possible through some formula that they must get right. This saddens me because I’ve seen so many sincere believers over the years make some of the most ill-advised decisions because they have fallen victim to formula-Christianity. That is, some weirdo has taught them, “if you do this, then God will tell you exactly what to do.”

Apart from the formula-Christianity, the second most common mistake comes from performance-driven Christianity. This is the teaching that if you perform for Jesus, He has to help you in whatever way you demand. It isn’t about a sovereign and loving God guiding you and caring for you, it’s about you being good enough so that God has to do what you want Him to do. And, since Jesus refuses to be tamed, these people inevitably throw up their hands and conclude that God doesn’t guide His people.

Finally, we’re all susceptible to manipulating our thinking so that we conclude that what we want is God’s will. One illustration I’ve seen over the years is people moving to a new place. They are absolutely certain that it’s God’s will for them to move to a better climate, a less-expensive area, or to their dream geographical location. But, when we consider what God says about our lives and especially what the Bible teaches about community and the guidance that He provides through discipleship and spiritually mature people speaking into our lives, they have totally missed the way God could guide them. It could very well be that God wants them to move, but when they leave community out of it, they are living unprotected by one of God’s primary provisions for us as believers.

-Pick up Ed’s book on Amazon-