From Tyler: Today’s post comes from Barnabas Piper, a guy who is not only a fellow PK, and a fellow depressed fan of Minnesota sports, but a great writer who is approaching a difficult and worthwhile subject with his latest book. Be sure to check out his book after you read his post. 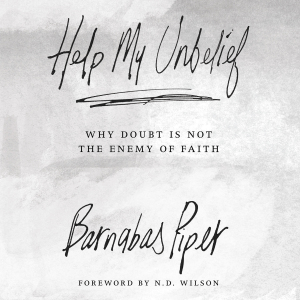 Belief means a range of things and can be used in a variety of ways. I believe my wife when she tells me something. I don’t believe the Minnesota Vikings will win a Super Bowl in my lifetime. I believe in a thing called love. I don’t believe in Santa Claus. Each of these statements is easy to understand by its context. But when people say they believe in God, what does that mean?

It is real because it is the sort of belief that makes up faith, and faith is what shapes a life. We can believe in God in the other two senses with no faith whatsoever, but the third use of belief is the makings of real faith. Faith cannot exist without it; it would be empty of any substance, faith in nothing. But when we believe completely in the reality of God and the rightness of His word and way, it will give a shape and direction to our lives. The effects will be visible.

This is the kind of belief Christians seek. It is not a black-and-white belief, either present or not. It is more like the sun. Some days it will shine brightly and shed God’s light on and through all of your life. Other times it will be obscured by clouds of distraction, by our delusions of belief (those assertions we assent to in our minds but which mean little in our daily lives), by fear or doubt, or by something else. But being obscured doesn’t mean it is doused. Sometimes it just takes time to break through those clouds. And like the sun, belief burns hotter in certain seasons of life than others. As Christians, we yearn for an endless summer of bright, warm belief.

It shines through because its object is imminent and immovable. Belief is only as real as what is believed in and what impact it has on our lives. When belief is brilliantly shining, that is God shining through the believer. Belief leads to faith, and faith is the means by which God shows up, whether it is big or small. That is why the realest belief is that which is wholly and unreservedly in God.

Barnabas Piper blogs at The Blazing Center, is the author of The Pastors Kid: Finding Your Own Faith and Identity and Help My Unbelief: Why Doubt Is Not The Enemy Of Faith, and co-hosts The Happy Rant podcast. Piper writes for WorldMag.com, contributes to numerous other websites, and speaks frequently at churches and conferences. Barnabas serves as the Brand Manager for the Leadership Development team at LifeWay Christian Resources in Nashville where he lives with his wife and two daughters.