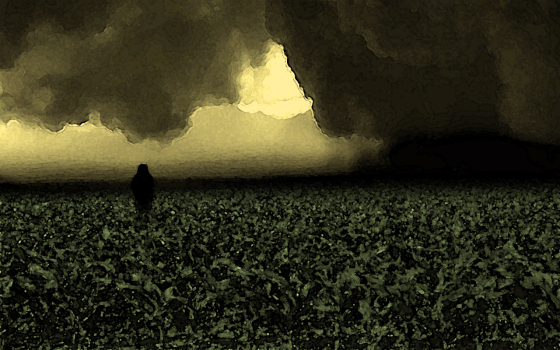 I’ve noticed a common denominator in conversations surrounding me, and conversations I’ve been invited into as well: they start with a current event, and they end with a Christian’s worry about the future. “If things are this bad now, can you imagine how bad they’re going to get?”

And I don’t want to mince words, I hate it, the whole thing.

Yes, I want Jesus to come again. And yes, some things are simply awful. You don’t even need to look hard to find plenty of those awful things.

But Doomsday Theology misses a vital aspect of the Biblical narrative, one that takes place long before the bulk of the eschatological writings within the apocalyptic genre.

Often a focus on end times theology (eschatology) can breed an insular attitude toward the world, where we must protect ourselves from the evil around us so we don’t get swept into it. The beauty of the incarnation is that God saw our brokenness and sent his son toward us, not away from us. Eschatology that encourages believers to enter into the brokenness of the world is helpful, anything else is knowledge that when focused on too much, can lead us astray, in part.

Outside of the negative Doomsday Theology often produces in its adherents, there are two more positive reasons to avoid the “it’s all going to hell in a handbasket” perspective.

Jesus is on the Throne

Christ Jesus who died—more than that, who was raised to life—is at the right hand of God and is also interceding for us. Who shall separate us from the love of Christ? Shall trouble or hardship or persecution or famine or nakedness or danger or sword?

David writes something similar in Psalm 11, quoting his adversaries who are saying to him, “what can the righteous do?” in the face of all that’s awful going on around them. David doesn’t really answer the question, instead responding with these words: “the Lord is on his heavenly throne” (Psalm 11:4).

God is seated on the throne. The picture Psalm 11 provides is of God’s faithfulness and of our purpose in this life. God wants those who bow to Him to get on with His Kingdom building work, not building a wall to provide themselves safety from the impending doom. The worries of this world have no power, because the God of all is on His throne.

How much is accomplished by worrying about the horrific things taking place? Anyone can draw attention to what is going wrong, but the people who make a difference are those who focus on God’s ongoing work.

John writes of this future heaven coming to earth event in his book Revelation, saying, “I saw the Holy City, the new Jerusalem, coming down out of heaven from God” (Revelation 22:2).

The Christian has an opportunity to reflect the kingdom that is here, and also point toward the kingdom that is coming. We are Easter people who are living on the other side of the resurrection of Christ. He has announced his kingdom, and the hope that life in Christ can bring.

And we live in a Good Friday world, a world full of despair, broken homes and broken families, people lost in sin, and God is asking for the light that lives within us to shout the announcement that the kingdom is here and it is coming.

Christians have far too much Kingdom work to be doing now to spend their time and energy getting caught up in a game of fear mongering of what potential evil may overtake us. The evil will not win, but even more, evil loses its foothold when we keep our hand to the plow.