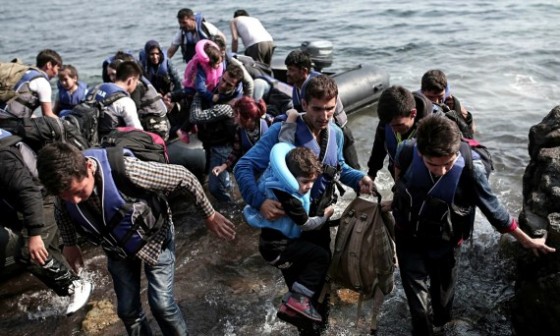 The God of the Bible is the God of the outcast, the helpless, the homeless, and the refugee. In Genesis 16 Hagar flees from her angry boss Sarai. Not long before this moment when Hagar is forced to flee the family compound, Sarai asked Hagar to have sex with Sarai’s husband Abram, in order for the family to have an heir of their own.

After fleeing the abusive situation, Hagar finds herself all alone, pregnant, needing help. God calls out to her in the middle of her distress. Hagar responds by saying, “You are the God who sees me. I have now seen the One who sees me.”

The story gives a glimpse of God’s heart for the forgotten, the devalued, the abused, and the refugee.

Yesterday afternoon I tweeted this after a reading a few articles regarding the Paris terrorist attacks and the Syrian refugee crisis.

New poll: “More states say no to refugees.” May this not be said of Christians. The God of the Bible is a God for the refugee.

The headline came from this article. While many clearly agreed with my sentiment, I also received comments back saying, “I don’t think you understand,” and other remarks questioning my sanity. This led me to the conclusion that more needed to be said. Twitter, while great, often cannot summarize well.

Much online ink has already been spilled over the Syrian refugee crisis, but it again entered the headline news over the weekend when reports substantiated that as many as 6 of the 8 ISIS attackers in Paris spent time in Syria. This gave another opportunity for the gaggle of GOP Presidential candidates to get headline quotes off their opinions on immigration, securing America’s borders, and the stupidity of Obama for potentially allowing Syrian refugees into the US (because, terrorism).

Nearly half of the governors around the US are already doing what they can to try to politically maneuver their way out of Obama’s stated plan for allowing Syrian refugees (note: they can’t actually do this, but they’ll try). Why? Partly because they’re following the party line on immigration (legal immigration as well, it seems), and partly because many polling numbers support their decision. Americans are scared. Fear drives the sentiment that Syrian refugees are terrorists, and harboring terrorists at home doesn’t seem like a good idea. Governors want the numbers on their side.

This downward cycle leads toward Christian leaders saying awful things like “just blow the whole country up” and leads many Christians to put their politics over their Christian obedience.

It’s in these situations where Christians are vulnerable. The American society is sweeping toward one direction, while the Bible is unavoidably seated on a decidedly different conclusion. What wins? Politics or obedience? As we’ve come to see through the gay marriage debates (it’s not really a debate anymore), politics usually has the upper hand.

“For the Lord your God is God of gods and Lord of lords, the great God, mighty and awesome, who shows no partiality and accepts no bribes. He defends the cause ofthe fatherless and the widow, and loves the foreigner residing among you, giving them food and clothing. And you are to love those who are foreigners, for you yourselves were foreigners in Egypt.” Deuteronomy 10:17-19

In case you want something directly from the mouth of Jesus, Here’s his take on helping the helpless:

The King will reply, ‘Truly I tell you, whatever you did for one of the least of these brothers and sisters of mine, you did for me.’” Matthew 25:37-41

Yes, the God of the Bible is the God for the refugee. The nation of Israel was once the refugee and God invited them in. In fact, they didn’t have to ask, He pursued them. Jesus interacted with those outcast from His Jewish society despite knowing the overtly negative reaction the religious leaders would have.

And that leads you to this simple question…

What is Your Response?

I hope you’ll consider the weight of your response. Politicians are looking to “we the people” to determine their course of action. While Christians do not need the government to determine whether they will live as obedient Christians, this is an opportunity where obeying the Bible flies in contradiction toward the readily accepted conclusion of society, and it must be met with Christians who drown out fear with love.

What’s at stake here? Christian witness to the world. If Christians care more about protection—if they give into fear, then their witness as followers of the God who sees is compromised.

Here’s a few other responses on the same subject you may considering reading as well:

“As information about these attacks continues to pour in, we ask that Christians and churches across the United States continue to pioneer the way for a compassionate response to the ongoing refugee crisis.” Stephan Bauman, President and CEO of World Relief, full statement here

“But the most painful part of becoming a refugee is losing your right to think. I used to think about my farm, my goats, and the education of my children. Now, I only think about how to survive each day.” Belinda Baumann on her time with a displacement camp in the Congo

“What is the courageous response? To close the borders for good? To turn away thousands of families and children who, through no fault of their own, have been victimized by war and violence and long for peace?

It is fear that drives out compassion toward our fellow humans suffering under the weight of injustice and violence. Fear, not courage.” Trevin Wax on a Christian response the ISIS and the refugee crisis

“Dear Syrian Refugees: Sorry, but Look At It From Our Perspective” from Tyler Huckabee

“I think it’s important that Christians push back against the fickle fear and political pendulum that turns the refugee into a concept rather than an image-of-God-bearing human being. Refugees are real people with real hopes and fears, just like you and I. In many cases they are our brothers and sisters in Christ.” Brett McCracken on “costly but Christlike” behavior