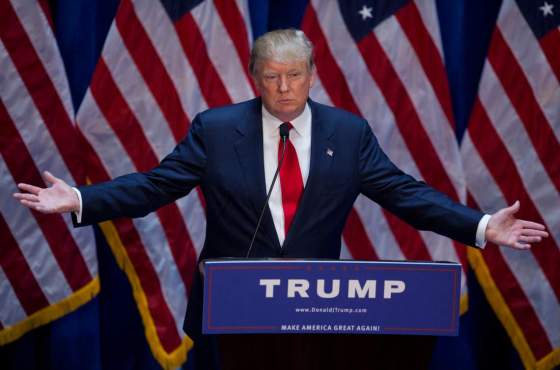 Barring the unlikely 3rd party candidate I’d like to see come forward, I will not be voting for a President in this year’s United States Presidential election.

The reasons why are a bit convoluted, so let me share my own context.

I’m a pastor at an evangelical church where the majority of the congregation is conservative minded folks. I come from a conservative family. I’ve only ever known the logical decision in voting to be for a Republican.

I am an unaffiliated voter in the state of Oregon, but on nearly every voting opportunity I have, I vote Republican. I am pro-life, fiscally conservative, and for small government, and while I do not agree with Republicans on a number of issues, their platform most aligns with my own.

My reasons for not voting for Hillary Clinton (those of you who are feeling the Bern can settle down, his nomination seems unlikely, at best) are simple:

But I will not vote for Trump. Here’s why:

Donald Trump is not a Leader, He’s a Dictator

Trump wants to “open up” libel laws so he can easily sue news organizations who speak unkindly about him. These laws have been upheld in court by justices from various perspectives. This desire of Trump’s shows that he does not know how to deal with people who disagree with him. He’d rather fire those against him, instead of being a true leader who works to build consensus and camaraderie.

In speaking kindly about Vladimir Putin and the Chinese government’s handling of Tiananmen Square, Trump shows he has no desire to lead, he simply wants to dictate with power and strength.

Donald Trump is a “Christian” for Political Purposes

Following his victory in South Carolina’s Republican primary Trump exclaimed, “I love the evangelicals.” He has spoken of being a Christian yet wasn’t sure he needed forgiveness, saying, “I’m not sure I have ever asked God’s forgiveness. I don’t bring God into that picture.”

If Trump went to my church I would tell him that the narrow road leading to life is found only through the recognition of a need for God and the forgiveness he offers. Any person who believes they do not need forgiveness has chosen their own road, not God’s.

People expect a Republican Presidential candidate to loosen governmental oversight, therefore increasing religious liberty and the rights that go with it, but with Trump this would not be the case.

One of the largest campaign platforms Trump has run on is banning Muslims from coming into the United States. No question there’s a general fear of Muslims in the US due to extremists, so Trump is stoking these fears and then using it as a way to generate support. If you are against the religious liberty of a religion other than your own, then you are against religious liberty.

Back in 2007, as Clinton pushed toward the Democratic nomination that Obama ultimately won, Trump had a difficult time choosing whether to support fellow New Yorker Rudy Guiliani or Hillary, saying, “They’re both terrific people, and I hope they both get the nomination.”

This illustrates a bigger issue, the fact that Trump has consistently changed his stance on people and issues. Like being blown by the wind, Trump seems to discern what position and person helps him in the moment, but when the wind changes direction so does he. Donald Trump is a liar who continually shifts for the sake of his own benefit.

Oh, and there’s other reasons too…

I have yet to mention that Donald Trump owns a strip club, or the various degrading comments he’s made toward women, or the white supremacists he’s welcomed support from, or the ‘I could shoot someone and not lose support’ comment, or the casinos he’s used to garner his wealth, or the negative comments about a war hero because “I like people who weren’t captured”—no, I haven’t mentioned any of that despite their relevance to the subject.

I believe there’s a better way forward for our country. Yes, it seems that better way is at least four years away now, but the best way to assure we move in that direction is by staying silent on voting day. Your silence in November will speak loudly for generations to come, that we must do better than this.

One ending side note to all this:

“But not voting Trump is a vote for Hillary! We can’t let her in office!” This is the line that Trump supporters have used over and over. Newt Gingrich used the same line in The Washington Times recently, then Bobby Jindal did the same thing in the Wall Street Journal.

A vote on a ballot is a vote for someone, an endorsement for the Presidential office, and a moral act, and Donald Trump is not fit for that office.

At the same time, Matthew Lee Anderson reminds us there are bigger things at stake than an election: “the witness of the Gospel exceeds the tyrannical urgency of political action in a democratic society: it expands the horizon of our hope beyond the election in November, and beyond its consequences over the next four and four hundred years.”