Last week I drove by a McDonald’s at 5:30pm only to find a drive thru line over 10 cars deep, wrapping all the way around the restaurant into the surrounding parking lot. I said to the people in the car with me, “People still eat at McDonald’s?!?” Ignorance is bliss I guess. I certainly don’t eat the healthiest, but I do draw the line at fast food. Oh, and I rarely use the drive thru (though that may have more to do with my power window being broken than some ideological position on drive thrus, it’s possible). 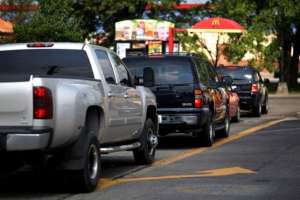 While I tend to point a finger at those who would eat the “food” available through the drive thru window of so-called restaurants, I’m certainly not adept at allowing for slow change in my life. If something doesn’t come quickly, I’ll move onto the next thing.

I’ve noticed something in myself and I see it in other Christians, and subsequently in other churches as well—there’s a pull toward something that on the outside looks like it will quickly meet a felt need. We’re drawn to things that will scratch the itch, put a salve on the wound, and provide a quick boost. But rarely do these things change the trajectory of our lives.

This is the struggle of change: our minds are like rubber bands; they want to revert back to the status quo after being stretched.

It takes incredible patience to change.

Eugene Peterson describes this well in his book on discipleship, saying, “There is a great market for religious experience in our world; there is little enthusiasm for the patient acquisition of virtue, little inclination to sign up for a long apprenticeship in what earlier generations of Christians called holiness” (A Long Obedience in the Same Direction).

A friend of mine recently told me he chose the church he’s part of because he thought the pastor had depth lacking in many of the other pastors he’d interacted with. I found his reasoning to be refreshing, yet rare. Most often I hear of people choosing a church or a book to read or music to listen to because it seems to scratch an itch they have.

Christians, in choosing to follow Christ, enter an ongoing journey toward Christlikeness. But this journey offers no short cuts. And the destination is both realized and far off, at the same time. From this stable foundation of your realized destination (you are in Christ, seated in the heavenly realms) you can endure the slow process of change, knowing God’s timing is always best.