That’s the headline from the Daily News in response to the shooting in San Bernadino 2 years ago. The cover includes a few tweets from Republicans leaders at the time, with emphasis added on the prayers they declared to offer. In the wake of tragedy everyone wants to offer thoughts and prayers. It’s the one thing we can do because tragic headline news makes us feel helpless against evil things. 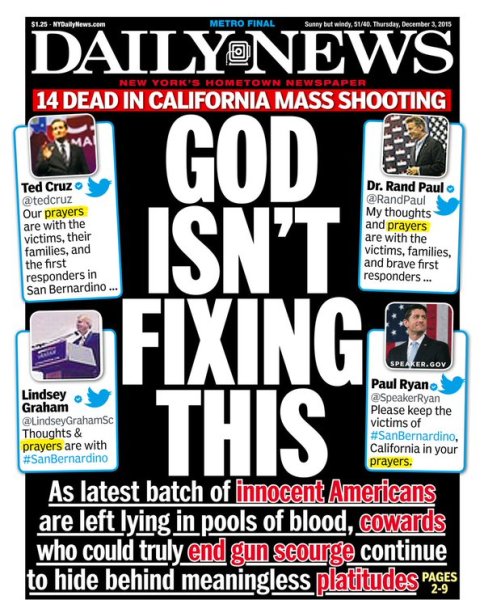 This past weekend a 5 year-old boy drowned in the river not far from my house. The local newspaper ran a few stories about the search for the missing boy, not declared dead for several days, while the search continued. Hundreds of comments poured in, the overwhelming majority simply said, “praying.” I must admit it strikes me as a weak response to such tragedy for the family.

Once you’ve seen enough tragedies you begin to think thoughts and prayers are not enough. Or maybe they aren’t needed. Or even worse, they’re just a way for people to deny their own part of working toward a solution.

Before the suspects in the San Bernadino mass shooting were found and killed in a gunfight, social media had reacted and then reacted to the reaction. You can consider this the backlash to the backlash against the reaction (figure that one out, why don’t you?).

As with every tragedy, people begin posting their simple status of “thoughts and prayers” for those affected by an awful event such as the one on a Wednesday afternoon in southern California. You can rinse and repeat this for every tragedy worldwide—people have the same online reaction to headline news tragedies and shootings coming at us day after day.

Sure the “thoughts and prayers” status update has gotten a little tired.

But does that make prayer a pointless act of “meaningless platitudes”? No.

It should be said that God’s Word is clear that faith without action is of no value. A work of God done on the interior of someone’s life will always result in external action. Consider 1st John 3:17-18:

If anyone has material possessions and sees a brother or sister in need but has no pity on them, how can the love of God be in that person? Dear children, let us not love with words or speech but with actions and in truth.

But to use a verse like this to say the prayers of God’s people are of no value is ridiculous. This logic creates a false dichotomy where praying equals no action. The headlines could read, “Don’t offer prayers, do something!”

Henri Nouwen eloquently pokes a big hole in this perspective by saying,

“Prayer without action grows into powerless pietism, and action without prayer degenerates into questionable manipulation. If prayer leads us into a deeper unity with the compassionate Christ, it will always give rise to concrete acts of service. And if concrete acts of service do indeed lead us to a deeper solidarity with the poor, the hungry, the sick, the dying, and the oppressed, they will always give rise to prayer” (Compassion, pg. 116, emphasis mine).

Also, we should not elevate human action as the focal point of human life, because we recognize there is something beyond us, rather Someone beyond us that we need help from. Lamentations 3:25 says, “The Lord is good to those whose hope is in him, to the one who seeks him.” We wait, in prayer, for God’s action, and His leading us in action, but this all begins with prayer.

In close, God may not be “fixing this” on the timeline we desire. The world may be torn asunder.

But God will fix this, and we invite Him to do so now, in prayer. Make me an instrument of your peace, Lord.