A while back I had the opportunity to see Dunkirk in theaters. While I thought the film was exceptional, I will say for a first watch it was difficult to follow. The film features three separate storylines that all connect in places, but the film has little chronological cohesion. Weaving between these three storylines makes it difficult to know the order of events taking place. 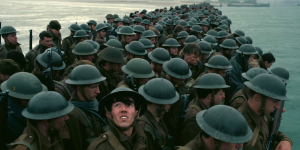 Where the film shines is in overwhelming the viewer. The lack of chronological cohesion, mixed with it probably being the loudest movie I’ve ever seen in theaters, discombobulated me. The musical score helped create tension even where the film presented none. And the enemy’s face was never shown, only seen in the form of airplanes dropping bombs and bullets being fired from various directions.

I walked out of the theater hardly remembering where I was, totally disoriented, shell-shocked. While I’ve read some reviews declaring some of these techniques as poor storytelling, I think Christopher Nolan achieved his goal: make the viewer feel as overwhelmed and anxious as a soldier on the beach of Dunkirk.

Often times the goal of the enemy is not to kill you, but to disorient you, disordering your life so that you worry about your next step. From there, the enemy can have its way. You see this disorientation in a nameless soldier played by Cillian Murphy, who is unable to even answer basic questions from his rescuers.

During the entire film you are thrust into the anxiety of knowing you are a sitting duck, surrounded by the enemy, incapable of saving yourself. Even when the obvious danger relents, the pressure never releases.

It reminds me that our lives are thrust into a battle, against an unseen enemy, who often prefers to disorder our lives rather than ending them. In fact, in this battle the enemy disorders us enough that we kill each other, losing sight of the image of God in others. The Apostle Peter describes this lurking enemy, by saying,

“Stay alert! Watch out! Your adversary the devil prowls around like a roaring lion, searching for someone to devour” (1 Peter 5:8, TLV).

This adversary is as strong as a roaring lion, to be feared more than any other wild animal. Yet it also prowls, often unseen, looking for the window of opportunity to open. Out in the open, on your own, you become its prey.

But there’s another element to this roaring lion. Its strength gives us fear, yes, but the sheer terror of any possible attack is what disorients us most. We often think of the worst evil as overt, directly in front of us, on the news, but the Apostle Paul reminds us we are in a battle far beyond what we can see or touch:

Much could be said about what Paul means when he refers to “rulers” and “authorities” and “powers of this dark world” and “spiritual forces of evil,” but I think it would be fair to say he’s referring to the existence of evil things, things opposed to God, operating below the surface.

Murders, war, genocide, racism, classism, all examples of injustice, these only begin to exist when pride and greed and selfishness are allowed to run rampant underneath the surface. And these only run rampant when Satan is given an opportunity. These oft-hidden evils can only lurk beneath the surface for so long before shadow shows its ugly face in the daylight.

Before we get too proud ourselves, we recognize this same evil prowls around us, lurking, looking for the window of opportunity. We too, are on the beach of Dunkirk, surrounded by bullets and beach, our lives hanging in the balance.

How can we fight this great war? What tools has God given us to overcome?

God’s Word is clear, we only need a few things to fight and win this battle: