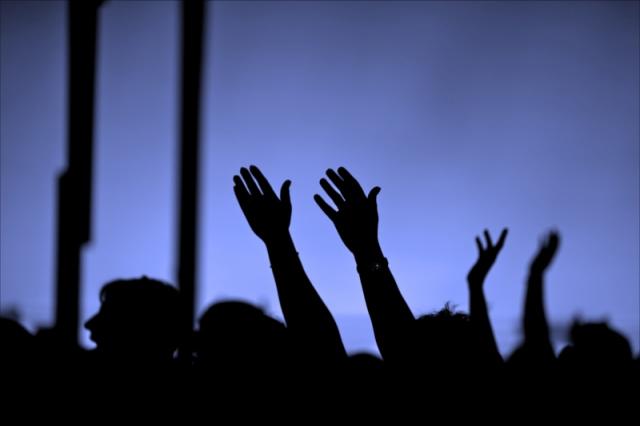 The day was full of “the lyrics need to be changed on that slide” and “let’s end that song 4 beats earlier in the outro” and “make sure you go to an F#m chord at the beginning of the bridge or we’ll all sound like we made a mistake.” In reality none of that is much different than any other Sunday.

I put on my happy face. Often when I’m leading worship the last place I want to be is on a stage. I feel I have nothing to offer. I’m fairly confident the people could careless about the whole singing in church thing. But something usually happens in the midst of the worship. I begin to have compassion for those I’m helping lead. I begin to sense God’s presence infiltrating my life in a way that I could barely describe here.

But this day was not one of those days. Despite my best preparations, my best motives, the best energy this introverted worship leader could bring–none of it seemed to be making a difference.

Don’t get me wrong, I’m used to people staring at the screens, yawning, sitting with arms crossed, talking loudly with everyone nearby…you name it I’ve seen it while leading churches in worship. Some people make it obvious they want no part, others are more subtle.

This Sunday I remember because by 830pm I was convinced it was time to think about some other church job than worship leader. Sure I can lead bands, I can sing songs, but maybe I’d worn out my welcome with these people I thought. God can use anyone, but on this day I wondered why he wasn’t using me. I was failing.

I walked off the stage to get some water. My throat was as dry as a hot afternoon on the high desert after singing the entire day. A student came up to me that had never spoken to me before in my life. He said:

I liked that new song tonight.

That was it. Nothing more. And it was as if God had tapped me on the shoulder and said:

I’m at work underneath the surface far more than you’ll ever know or understand. Be faithful.

Is it a stretch to take the words of that student and turn them into those words from God to me? Absolutely. Is it the truth? Absolutely.

This was a student who I have never, ever seen sing along with any of the songs during our time of corporate worship. He came to our high school group gathering inconsistently at best. And yet somehow in the midst of my awful day, God was working in him to engage on a level differently than what I could see on the surface.

I think ministry in church is often the simplicity of 25% being faithful–25% showing up–25% a willingness to serve–and 25% trusting God to do things only He can do. I tend to make it quite a bit more complicated than this. My own heart and head often get in the way and I start to listen to negative voices in my head that say it’s time to do something different.

That night I learned one valuable lesson…The biggest truths often show themselves in the smallest and subtlest of ways.

God doesn’t have to show up with a lightning bolt or a thundering roar from above for Him to be felt in the depths of my being and on this night I heard Him loud and clear.

Has a big truth shown up in a small way in your life before?