Today’s post comes from a great writer and author, Ed Cyzewski. If you’re interested in guest posting on this blog, head here for more information.

The last thing my pastor told me before I left for seminary saved my faith. I think he was just trying to save me from having a rough time in my first New Testament class or from getting frustrated with my professors. As it turned out, he shared something that I have clung to over the past eleven years.

Settling into our breakfast at a Bob Evans where you could hear the roar of the New Jersey Turnpike a few hundred feet away, he told me the following about seminary, “Don’t expect to find all of the answers.”

He was responding to a comment I made about looking forward to really digging into the Bible. I’m pretty sure he meant that I wouldn’t learn everything there is to know about the Bible. That in and of itself was sound advice, but that wasn’t quite what saved my faith.

I don’t know what I expected from seminary. I’m pretty sure I expected lots of answers to all of the tough questions that Christians face—I wanted everything to compute. I also expected seminary to be awesome because I wouldn’t have to take science or math classes, while I could crack Greek jokes in the cafeteria all of the time.

Seminary certainly had very little math, but the Greek jokes left something to be desired (sigh).

Instead of finding all of the answers, seminary revealed all of the dirty little secrets that pastors aren’t allowed to talk about because they’d lose their jobs if they brought any of it up with their congregations.

I confronted controversial topics like biblical authority, inerrancy, the problem of evil, the character of God, how salvation works, the historic views of hell, women in ministry, where we got the Bible from, and the list goes on. My pastor had warned me that I wouldn’t find all of the answers in seminary, and he was right. I found many more questions and problems than the average Christian faces in Sunday School. Since he had warned against finding all of the answers, I was able to take it in stride.

His advice became my mantra as I faced fresh theological dilemmas that had no solution in sight.

I could have swung in any number of directions, but I ended up realizing that my foundation wasn’t some brand of theology or air-tight way of interpreting the Bible. Christianity also doesn’t survive by hiding from tough questions, even the kinds of questions that don’t seem to have answers.

I’ve seen Christians deal with tough questions in a variety of ways. Sometimes they just gave up, admitting that the answers of their childhood faith couldn’t cut it in the adult world. Others dismissed tough questions and the people who asked them—no doubt fearing their faith would crumble if exposed to tension.

Though my pastor was trying to save me from the disappointment of not learning the Bible inside out in seminary, he also planted a seed of doubt that has served me well. While in seminary I learned that my faith could survive the tough questions that seminary professors needed to ask because Jesus never promised us all of the answers.

Jesus promised us life, hope, peace, joy, and love. He promised that remaining in him is enough.

I struggle with the tough questions sometimes. I’m not afraid to face them, and I never want to settle for easy answers—even if I’m convinced that many of them can be reasonably resolved. However, at the end of the day, Jesus isn’t going to test us to see if we answered all of the tough questions correctly. He’s going to ask if we abided in him and let him reshape us into Kingdom people—members of his family.

God’s answer for our tough questions is his presence. When I can abide in him, I know him and suddenly finding all of the answers doesn’t matter. 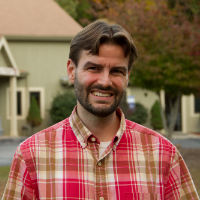 Ed Cyzewski is the blogger at www.inamirrordimly.com, co-author of Hazardous: Committing to the Cost of Following Jesus, and author of Coffeehouse Theology: Reflecting on God in Everyday Life. He lives in Columbus, OH with his wife (who is due to give birth in July!) and house rabbits (who do nothing but beg for treats and chew on his couch).