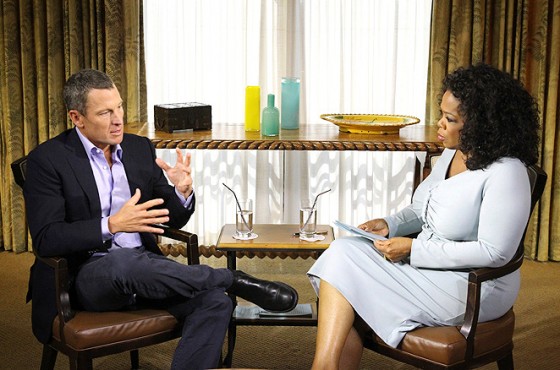 The great thing about this picture is how well it illustrates Oprah becoming a cultural pope who allows for confession and forgiveness of news worthy downfalls.

Tonight Lance Armstrong will announce to the world that he did in fact take performance enhancing drugs during his incredible run of 7 consecutive victories in the Tour de France. For those who looked to Lance as a source of inspiration due to his prominent role in cancer awareness and research, this is devastating news. To those who blew the whistle on Lance many years ago, I have no doubt the truth is welcome news.

Lance Armstrong is a sports figure who transcended sports by beating cancer over a decade ago, and then rising to, what was at the time, a place no other cyclist had been. Lance sat at the door step of death and rose to the height of athletic achievement. In the past Lance has been seen as a superhero comic who is indestructible. Cancer could not stop him and neither could other cyclists. This provided hope to those battling cancer and awed the fans of cycling.

All that is gone now.

The invincible man has now shown his real face.

I listened to a radio show host yesterday berate Lance for choosing to confess his lies. He prefered Lance to crawl into a hole and never again come out. In conversations with others it seems many also prefer to sweep Lance under the rug so we can move on.

I tend to disagree.

Lance probably deserves all the hate you could throw at him, but I see an underlying storyline going on that many are choosing to ignore, to instead throw rocks at the man. Your shoulder might be sore but it feels good to place yourself above him right?

Is the truth best left unsaid even if it stings?

On my worst days I hide how I’m really doing and who I really am, in order to become presentable, hoping others won’t see through my cracks. Keeping up an image that does not flow from the true self is a never ending foray of deception that cannot last. This has been Lance’s life for the last decade plus and the weight of it has become unbearable, for all the obvious reasons.

Instead of embracing who I really am, I often get pulled into a life where I simply cannot focus on the work placed before me. I recently shared a secret with thousands of people that was previously only known by less than 15 people. Even in writing it, I found the truth to be liberating. I no longer needed to hide the past, the mistake.

Brennan Manning describes the false self as finding an identity connected to achievements and failures, both of which provide the idea that we are fully defined by what we have or haven’t done right. For many of us we instead choose to hide (especially our failures). Manning says, “In a futile attempt to erase our past, we deprive the community of our healing gift. If we conceal our wounds out of fear and shame, our inner darkness can neither be illuminated nor become a light for others.”

Rather than condemning someone for choosing to reveal who they really are, I think we should encourage them. Lance is going to pay a severe price for his decisions in the coming years, and this is a fair and just thing, but critiquing his decision to be forth coming with the truth should not be apart of the price he pays.

I appreciate Paul’s words toward the end of his first letter to the Corinthians: as we allow others to fully know us we paint a picture of our future in the presence of God.

Truth telling always beats propagating lies. We don’t need to champion Lance, but we can champion the truth.

Embracing who you really are is far better than living into your false self.

Will you be watching the interview? Are you glad Lance is telling the truth? Share in the comments.

Click to here to receive future blog posts via email