Today’s post from Jenelle D’Alessandro is part of the blog series Discipleship: Re-Imagining Our Calling From Christ. To receive future posts from the series in your inbox head HERE. Engage with the writers and community of readers using the hashtag #DiscipleshipBlog.

I have to confess, when Tyler asked me to write about discipleship, my English-major brain turned to etymology.

I thought to myself:

If my old professors taught me right, the Latin for “disciple” has to be something like discipulus / discipulae, right? A discipulus is a learner. A learner must have a master. Disciples learn. Masters master. I’m sure I could pontificate about this for quite awhile, honey!

I’m afraid that discipleship is a word that makes us squirm, a bit. Mostly because we no longer know what it means, and it is easier to pay it lip service. 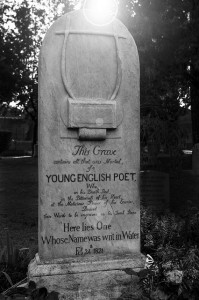 Then I remembered a poem I’d listened to that made me squirm, quite a bit. I listened to it on the drive home from the hardest race I’ve yet to run: Ragnar Trails Relay, in Lake Tahoe.

The run was just two weekends ago. Each on our team ran 17 miles per person, through some of the most intensely beautiful mountain trails you could imagine.  I cried at one point, it was so beautiful. I almost cried at another point, it was so difficult. The drive home from Tahoe to Los Angeles felt luxurious, especially sitting next to my dear friend Mackenzie, and with one of my favorite poets on the CD player, Galway Kinnell.

PSA: If you have not ever listened to a poet read their own work, please stop everything and find a poetry reading immediately. They make excellent dates, incidentally. (Men, bring the lady flowers. Lady, accept the man’s flowers and let him open the door for you.)

Galway Kinnell has a voice like dark timber that hums deep through in the Sierras. Here is his poem.

When I was twenty the one true

free spirit I had heard of was Shelley,

of women, the abolition of wealth and class,

and poems on the bliss of romantic love,

Shelley, who I learned later, perhaps

then pregnant with their second child,

and a few months later ran off with Mary,

with them Mary’s stepsister Claire,

and in this malaise a’ trois, which Shelley

had imagined would be “a paradise of exiles,”

they lived, along with the spectre of Harriet,

who drowned herself in the Serpentine,

and of Mary’s half sister Fanny,

who killed herself, maybe for unrequited

love of Shelley, and with the spirits

of adored but often neglected

in the pursuit of Eros – Harriet’s

Ianthe and Charles, denied to Shelley

and consigned to foster parents; Mary’s

Clara, dead at one; her Willmouse,

the baby in Naples, almost surely

Shelley’s own, whom he “adopted”

and then left behind, dead and one and a half;

whom Byron sent off to the convent

at Bagnacavallo at four, dead at five —

and in those days, before I knew

any of this, I thought I followed Shelley,

who thought he was following radiant desire.

Discipleship is nothing more than an ardent following. It is a learning that follows in the proverbial footsteps of another. It is intentional, while possibly not terribly thought-out and planned. In other words, we enact discipleship all of the time.

We pattern ourselves after that which (or whom) we look at the most. It is an automatic response.

Jesus told us to go into all nations and to make disciples. You have heard this.

We are following the dreams we’d written in our high school yearbooks, measuring ourselves according to an abysmal yard stick of what-everyone-else-in-our-peer-group-accomplished. We are following, blindly, individualism and consumerism and a violent streak that seems to say “all is ok, you are entitled to ________.”

And then I thought, I remember what it felt like to walk in Rome that day through the Protestant cemetery, to find poetic giants from the 19th century resting in peace in the same area. I found John Keats’ grave next to Shelley’s.

Keats’ tombstone was inscribed, “Here lies one whose name was writ in water.” He’d asked specifically not to include his name on the tomb, but to just leave this inscription. Someone with a niche for PR decided to include a bit more descriptors, nonetheless.

I think Jesus spent 30 or so years being hidden as a carpenter for a good reason. His 3 years of public ministry were spent pouring out into the lives of those whom we know as the “12 disciples.” To the 12, Jesus was the master teacher and rabbi, among many other things. More, he was an excellent friend who knew when they needed to steal away to rest and just be with him.

What we forget is that the real stuff of those 3 years for Jesus were built on 30 some years of hiddenness, of character building, of getting horrid splinters and trying to bless, not curse. 30 years where the God of the world, also fully-human, had to apprentice under someone who knew the materials and the trade of carpentry better than he. And he embraced the pain fully.

May we be those who can turn around, at all times, and know precisely whom we are following.

And may we find that the one we are following will never have his (or her) name writ in water. May we follow the only one whose Name endures forever.

Jenelle D’Alessandro is a Writer and Producer for Radar Creative in Burbank, California. Find her at Border and Greet Me, where her writing has moved with her from Lisbon (2006) to Los Angeles (2007+).  Jenelle is somewhat obsessed with the scratchy borders of Boyle Heights, theology, culture, poetry, and recently, distance running.