Today’s post from Natasha Metzler is the ending of the blog series Discipleship: Re-Imagining Our Calling From Christ. I hope this has been life giving for you. I’ll write a follow up post to the series next week. Engage with the writers and community of readers using the hashtag #DiscipleshipBlog. 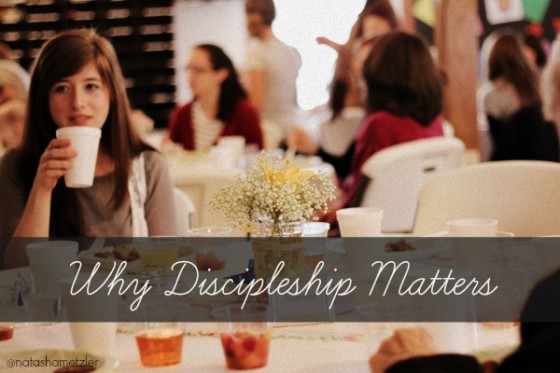 She had two children by the time she was nineteen years old. She pulled herself up out of this non-christian background and chose to follow Jesus. She wanted to know Him, to serve Him. There was something about who He was that drew her like a magnet.

But it wasn’t after the babies were born that she found Him. It was when she was sixteen and pregnant for the first time.  When she was holding her son in her womb and wondering what the point of life was. She picked herself up after the birth and found a church, where she faithfully attended even though she soon had another baby.

When she got pregnant out of wedlock for the third time, the church shamed her.

She had been a Christian for years. The other Believers around her shook their heads in sorrow. We all know what God thinks about such behavior.

I asked her, when she was telling me the story, “Why did you keep living that lifestyle after you got saved?”

And her answer stunned me right silent.

Tasha, no one ever told me that God had any opinion about the when and why of sex. They shamed me afterward but never taught me any different beforehand. It sounds silly to say now, but at the time I had no idea that it mattered at all.

I sat quiet through the rest of her story. The years of feeling less-than in church circles and struggling to make ends meet. The decades of feeling like she was three steps behind when it came to pleasing God, wondering if she just wasn’t good enough, but wanting to follow Him enough to keep going.

I wanted to shake my fist at the hundreds of Christians who had crossed her path. Hadn’t anyone, somewhere along the way, thought to disciple her?

Everything she knew of Christ, she figured out on her own. Which is commendable for her but downright ridiculous on the side of the church. In fact, it’s amazing she chose to keep following Him at all. (thankfully, He is good and faithful, even when we fail.)

Discipleship is written in the DNA of Christianity. Jesus called twelve followers and taught them. Those twelve taught dozens more. Discipleship was passed like a baton in a relay race, right down through the centuries.

And it isn’t always instructing, it is living truth side-by-side. It is getting into each others lives. It is asking hard questions and feeling anger and hurt and figuring it all out together.

Discipleship is community and relationship, where there is dialogue about the things of God.

When someone comes to Christ, I should be flinging back the doors of my home and my heart to them. I should be vulnerable and real. I should open up the Bible right beside them, not just on a church pew, but at my kitchen table.

But it’s easier, isn’t it, to just sit silently beside someone and listen to a sermon? It’s a lot harder to sit across from someone with my Bible open to I John and have them say, “So, what does he mean by “make our joy complete”? How is it complete?”

And maybe this hungry follower will be filled. Maybe this young single mother will find truth and acceptance and true love, the kind that lasts and lasts. Maybe a lost world will start to realize that this Jesus thing has power.

Natasha Metzler lives with her husband on a farm in Northern New York. She is the author of Pain Redeemed {when our deepest sorrows meet God} and is still learning what it means to truly follow Christ. She documents her journey at natashametzler.com and you can also find her on twitter and facebook.