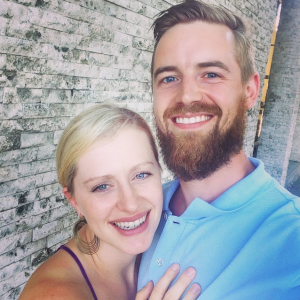 This past Monday night my wife Rose and I went on our first date since our little girl was born, back in January. Yikes, too long. That’s not the point of this though. At some point in the conversation she asked me:

“Where do you see yourself in 5 years?”

Rose had an interview last week so she must have had overly obvious interview questions on her mind.

A few years ago I may have come up with the same answer I gave Monday, but in the back of my mind I would have wondered about the great things that may lay ahead. I am goal driven, pursuing excellence. I need projects to keep going. My ambition fuels my everyday pursuit of ordinary things.

While my answers in the past were often simple, rooted, I had unsaid desires for something that could be seen as significant. Often I would not voice these dreams because I knew they were more about me than anyone else. Hardly a dream worth living if you ask me.

On Monday night my answer was simply, “I want to be here.” No underlying dreams left unsaid. No faux humility in the answer, I meant it. I mean it.

While relationships and ambitions are not so easily distinguishable, often pursuits in life are broken down to either being about the people around us, or the goals we desire to achieve. The age-old question of whether happiness is found through relationships or ambition isn’t really a fair question, but it is one we ask quite often.

In examining several studies, an article in The Atlantic had this to say:

In Canada and the United States, having frequent contact with neighbors was associated with higher levels of well-being, as was the feeling of truly belonging in a group. “If everyone in a community becomes more connected, the average level of subjective well-being would increase,” they wrote.

This may explain why Latin Americans, who live in a part of the world fraught with political and economic problems, but strong on social ties, are the happiest people in the world, according to Gallup…Meanwhile, wealthy states like New York, New Jersey, Connecticut, and California were among the least happy, even though their inhabitants have ambition in spades; year after year, they send the greatest number of students to the Ivy League (read the entire article HERE, it’s well done, to say the least).

I don’t think it would be fair to distinguish the ministry of Jesus as being either about relationships or ambitions. He is the most significant person in history, and he focused the bulk of his time to handful of men. But in my own sinful nature, my ambitions are often distanced from the relationships I hold closely.

Just as incarnation came before glorification, so relationships should come before ambitions. Yes, Jesus had more impact on the world than any other human, but this world changing ultimately came through the people He focused on.

As I’m learning, a life of fulfillment comes through those relationships, not the bigger ambitions I often have in view.