In his compelling work titled Disappearing Church, pastor and writer Mark Sayers lays out a thoughtful argument for why the church is disappearing. The issues raised are far greater than I could raise in one post (seriously, buy the book, Mark is excellent), but one point I connected with is the difference between what he calls code and pitch.

Here are his definitions for both:

Ours is a culture primarily defined through pitch. The church, struggling to hold onto the influence of the past, now speaks the language of the culture, using pitch instead of code to build their communities.

Pitch is also fleeting, making it difficult to lead people into a code mindset. If you invite a person into something through self-expanding language, only later explaining that actually the whole thing is about self-denial, good luck keeping that friendship.

To this focus on pitch Sayers says, “We gain the immediate benefit of reaching and attracting people, but if they have come for the pitch, wanting spiritual succor and community, while maintaining and maximizing their own personal autonomy, eventually the debt must be paid by both the church and the individual believer.”

Society today has placed the individual self on the pedestal, but the church must continue to place Jesus on the pedestal, at the denial of self. This message, in opposition to pitch, is not readily acceptable, but it is the path to fulfillment. As Sayers put it, “We cannot renew culture and refresh our churches without placing God at the center.” 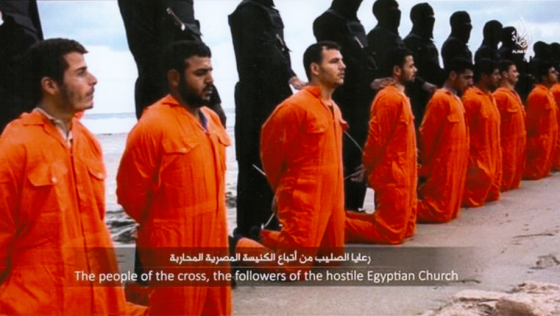 Just over a year ago, the above image went viral on a Sunday morning. The story behind it would stop nearly everyone in their tracks. 21 Coptic Christian men beheaded for their faith. It’s difficult to fathom the strength of these men in the face of such evil.

In speaking of her latest album release, Audrey Assad shared about seeing the image of the 21 men for the first time. As she sat down at the piano, the image led toward her writing the song Even Unto Death.

These 21 men and countless martyrs worldwide are the antidotes to “pitch” Christians, who seek the expanding of self. They made the ultimate sacrifice. In a world of pitch, they followed the code of being a Jesus follower, giving up their lives.