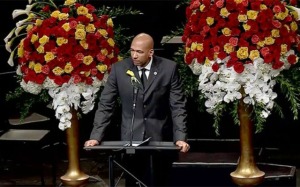 Last week an NBA coach made headlines for the message he gave at his wife’s memorial service. Monty Williams is currently an assistant coach for the Oklahoma City Thunder, having previously spent a few years in New Orleans, San Antonio, and Portland. A few weeks back his wife was killed in a head-on collision.

What made this message headline worthy? Forgiveness. Nothing causes today’s world to scratch its collective forehead more than the granting of undeserved forgiveness.

One would expect hatred toward the individual whose vehicle swayed over the center line, taking the life of an innocent driver, but instead, Monty spoke of care and forgiveness—Monty spoke the gospel. He ended his message by saying these words:

In my house, we have a sign that says, “As for me and my house, we will serve the Lord.” We cannot serve the Lord if we don’t have a heart of forgiveness. That family didn’t wake up wanting to hurt my wife. Life is hard. It is very hard, and that was tough, but we hold no ill will toward the Donaldson family. And we, as a group, brothers united in unity, should be praying for that family, because they grieve as well. So let’s not lose sight of what’s important.

*You can listen to the entire message from Monty Williams below*

Late last year the church in Charleston that had been under siege by a raging white supremacist responded to their terror by offering forgiveness. How would the world see these actions? Beyond comprehension. Since then Emanuel AME Church has been nominated by local politicians for the Nobel Peace Prize.

Christians become noteworthy in many disparaging ways. We argue about building walls, or we stand strongly in opposition to the movement of the culture, or we abandon central beliefs in order to more easily integrate into society. All of this might be noteworthy, but it is does not point to Christ.

All this reminds me of the importance of Christians reflecting toward others what God has done for them. “The greatest single cause of atheism in the world today is Christians: who acknowledge Jesus with their lips, walk out the door, and deny Him by their lifestyle. That is what an unbelieving world simply finds unbelievable” (Brennan Manning).

Instead, may the forgiveness offered through the work of Jesus be the launching point for Christians to extend the same forgiveness to others.

Forgive as the Lord forgave you. Colossians 3:13