I could easily name a myriad of reasons as to why my posts have been infrequent on here, but it would be a waste of your time to read that list. In the stead of my own pontifications, I wanted to share a few separate long-form essays, and blog posts that have been on my radar on several occasions in recent weeks and months. 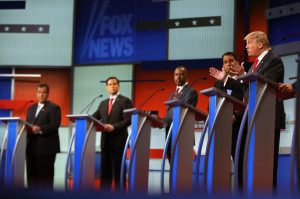 Let’s start with the headline news-man of the past few months, Donald Trump. I already shared some brief thoughts on the Christian Manifest Destiny line he’s run his campaign on. Then last week I wrote something for Facebook on why Christians who support Donald Trump have a politics that dictate their faith.

But maybe the best thing to consider in all this is how we got to the point where Donald Trump could be leading polls for a majority political party in the US, as bizarre as it sounds to write that. Alan Noble nailed it with his article honing in on that question.

I’ve had numerous conversations on GQ’s article on Carl Lentz, Hillsong NYC, and Justin Bieber since it was published in December. Aside from the article being genuinely excellent, it raises some helpful questions about what church is and where Hillsong NYC fits. If you’re a Belieber don’t miss this, but if you’re not this might be even better for you to read.

This actually has nothing to do with The Donald, trump card. If you’ve spent any time in churches in your lifetime, undoubtedly you have run into the person whose answer to the struggles within the church is “but we preach God’s Word.” While is might be an acceptable answer in a vacuum, it misses the larger picture.

David Prince said this on the subject: “When our commitment to the primacy of the Word and gospel does not trickle-down to every aspect of congregational life, we are like the obese person lecturing on the primacy of personal fitness or someone living opulent lifestyle lecturing about frugality.”

The hype on this show is real. No other way to explain the entire thing than utterly horrifying on level upon level. My friend Karen had this to say after seeing the 10-part documentary: “Sometimes it’s not clear which side of the bars the bad guys are on.”