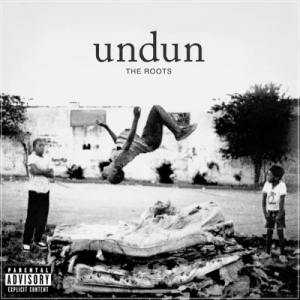 I’ve been a fan of The Roots for a long while. They’re a unique band who has blended rock, hip-hop, and other music genres better than anyone else. They mixed genres in a way that no one else had before them. Plus I’m a Jimmy Fallon fan and they play on his late-night show as the house band.

Yesterday The Roots came out with a new album that I was looking forward to hearing (listen to the whole album for free here). A number of people I’m connected with on Twitter and Facebook were talking about the album so I thought I’d join in the fray. As I started listening, it all seemed to be great, but eventually I had to turn it off after a bunch of “F-bombs” were dropped and multiple times the “N-word” was used. It’s not that I’m judging them for using those words in their lyrics, I don’t know them well enough to understand the context of why they find it necessary to do so. But for me, it was something that went from being interesting, thought-provoking, and entertaining to listen to, to something that was distracting and no longer edifying.

Even looking through some of the lyrics on the songs I didn’t listen to, there was a lot of great things said. The whole album focuses on the choice of making something of ourselves or living a life of fast money and crime. For me, though, it was too hard to enjoy the good stuff with so much not-good-stuff to sift through.

But really this post isn’t about F-bombs or N-words, and it isn’t about The Roots. I wrote a long while back about how instead of condemning culture, we should critique by creating. And I stand by that principle. I’m sure there’s some Christian group criticizing The Roots for their album. People complain when anything in our culture doesn’t support their own values. That isn’t really my game though. Personally I won’t listen to the album but I don’t find it necessary to tell everyone around me not to listen to it as well.

What I want to discuss is where we draw the line…when does something go from an interesting look at culture (even if it doesn’t reflect my values), to something that is no longer edifying enough for us to engage with at all?

For me, I had to draw the line at letting this language become a part of my thinking habits. Each person probably has a little different way of engaging with pieces of our culture that can be difficult to engage with. I don’t think we’re each called to engage in the exact same way with the exact same things. We’re not robots. Some of us are probably called to go to a Roots concert with friends, others are called to stick with Christian radio.

For you…where do you draw the line of disengagement?