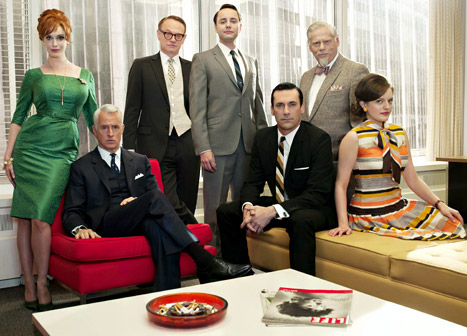 I’ve been watching the first four seasons of Mad Men with Rose over the past six months. I know plenty of people who rave about the show and so I took the dive and plowed through over 50 episodes. At first I didn’t get what all the fuss was about, but toward the end of season one the intricate plotlines began to click for me.

Since then I’ve taken plenty of mental notes about the show and the lives depicted in the show. Most of these notes are about how not to live because nearly all the characters on the show are what I would call anti-heroes, with Donald Draper being the chief anti-hero. These characters, in many ways, are depicted as heroes, but they continually fall on their own sword making awful decisions in the heat of the moment. We cheer for them despite knowing they will continually fail. It could be why people still watch after over 60 episodes—people are waiting for the anti-heroes to become heroes.

Here’s a few lessons I’ve learned through the first four seasons of the show:

Selfish People Destroy Everything Around Them No Matter How Much Changes

I see the majority of the characters on the show as selfish individuals who seek their own before they spend a second thinking about others. Don Draper, the main character, is the king of the selfish people on the show, but his wife (and then ex-wife) Betty is no better. And all throughout the now five seasons of the show, we see both of their lives unravel. Sure they each have moments when things seem to be coming together, but then, sure enough, things collapse around them.

Even through divorce and new jobs, neither of them, nor many of the other characters, can keep from destroying the people around them.

Habits Have to Change Before People Can Change

Nearly all of the characters of the show have watershed moments when they desire to live differently, sometimes in significant ways. And yet, none of these characters change in any significant way. And I attribute this to trying to change as a person without changing the environment. At one point Don is noticeably trying to be less of a womanizer, but he can’t resist from drinking too much late at night in the office or at a bar, and in his many weak moments he falls back into old habits.

The saying of old habits die hard is true, especially when we’re not willing to change anything that effects our bad behaviors.

Smoking Only Looks Cool On TV

Hopefully this one is fairly self explanatory. I’ve never watched someone light one up and thought, “wow, they make that look cool.” Smoking. It will kill you. Literally. Having not been alive in the 60s and now living in a world where you can’t even smoke in most restaurants or bars, the amount of smoking shown on the show is almost bizarre to see.

Hiding is Not a Long-Term Solution

Despite a few close calls, Don has managed to hide his true identity from almost everyone for a long time. But especially in season 4 of the show, Don is overcome with fear of being found out for his lies. He begins to tell people he has little business trusting, mostly because we get the sense that he can’t survive keeping it all in for much longer. Speaking truth is freedom for the soul.

People Are Watching You and Learning What is Acceptable

In the middle of season 4 Sally Draper sneaks out of a doctor’s appointment to visit her dad in the city, unbeknownst to her mom. Betty, her mom, berates her when picking her up later in the episode, but we see clearly that Sally has learned her life lessons from her mother. Sally gets her way and pouts when she doesn’t.

All of Sally’s selfish patterns in life have been picked up from watching her parents model that lifestyle to their own detriment. Little do Don and Betty know but the people closest to them are watching and picking up ideas of how to live life acceptably.

For those of you Mad Men fans, what lessons have you learned from the show?