A little over a year ago the gun sounded and I headed out on the adventure of running my first long distance race, a half-marathon through the rural hills of Portland, Oregon. Despite hating running long distances in high school and college I have come to appreciate the kind of devotion it takes to prepare the human body for running that far. 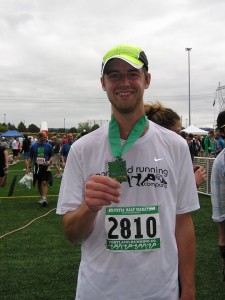 12 months ago I signed a contract to write my first book. As someone who had only ever written papers in school and blogs on the internet, I had little idea what I had gotten myself into.

Could I write a whole book?

Would I write anything good?

What I learned is that training and then running my first half marathon taught me more about the process of writing a book than any piece of advice other writers gave me.

Here’s the four key lessons running a half-marathon taught me about writing a book:

Have a Plan and Stick to It

I’ve yet to meet someone who completed a long distance race without having a definite plan for how they would prepare their body. Long distance runners have to be conscious of what they eat (especially on race day), they have to establish a schedule that allows them to hit the pavement 3 to 4 times a week, and they have to slowly work their way up from being able to run a mile to being able to easily running double digit mile distances.

Having the discipline to follow a set plan in training for a long distance race almost guarantees success on race day.

As I learned the hard way, the first day “writing” is on the calendar and you fail to stick with the plan, failure begins to creep into your mind.

“Maybe you aren’t supposed to do this,” you will begin to think. Those kinds of thoughts are toxic.

Having a plan and then sticking with it no matter the obstacle, is the first step toward the success of completing a book, or any other writing project.

Those of you who run in neighborhoods know the heart-racing feeling of an angry dog who wants to make you his play toy. I’ve had plenty of instances in which I wasn’t sure if the dog wanted to race me or eat me. While I never got bitten, I did have a few close calls.

During my writing the dogs that tried to bite were usually more subtle than an angry canine.

Complacency, “writer’s block,” and lack of clarity are the dogs that bite writers day after day.

Rather than trying to create a world in which dogs do not bite or dogs do not exist, acknowledge they are on the prowl and instead create a writing environment where you can consistently overcome them.

Stay Focused on the Finish Line

The best piece of running advice I received was to watch the finish line. This was a two-fold piece of advice:

1) Good running form is developed by keeping your head up, not watching your feet.

2) A good running mindset is developed by blocking out the sore legs and the burning lungs, knowing the finish line has not been reached.

While I was writing my manuscript I grew out my beard for the entire 5 month process. Every time I looked in the mirror or touched my face I was reminded that the finish line had not been reached.

It’s typical for writers to celebrate the signing of a book contract so much that they lose sight of all the work to come after it.

Keep your eyes focused on the finish line, not the start line.

Rise to the Moment

After training for months and months, race day is the moment when you either reach your goal time or not. As the gun sounds all the training matters very little and it comes down to whether you’ll rise to the occasion of the moment.

In a writing world full of deadlines and a plethora of projects, it is inevitable that you will need to rise to the moment to create something meaningful and worthwhile.

Don’t wait until tomorrow to get the work done.

The only moment that is guaranteed is the present. Seize it.

What lessons has running taught you about writing?