Note from Tyler: Today’s post is from Jonathan Malm. Outside of being the creative force behind many church stage and platform designs (which is what we have interacted about in the past), Jonathan is a creative thinker who desires to serve the church. Jonathan just released his first book and wrote about that process for all of you to read about today. 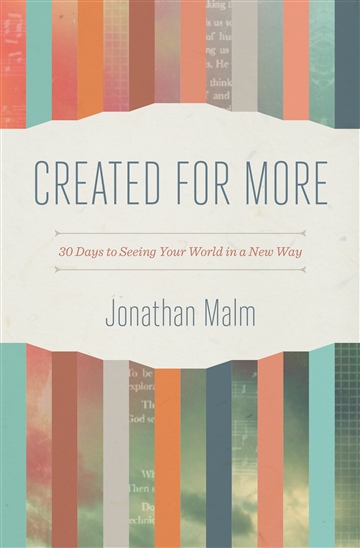 I was sitting at my desk, considering how great my job is, the day my boss called me to his office to fire me.

“We love you and we’ve really enjoyed working with you. We think you’re a great person. And we wish we didn’t have to do this. But after much consideration, we’ve decided you aren’t the right person for this job. We’re going to be looking for someone else to fill your position here.”

Getting fired from my job was a serious blow. It hurt.

But I realized the biggest thought going through my head was a worry that nobody would ever take me seriously again. It was pure, concentrated insecurity that was taking over me.

I was working at my dream job. I was somebody. A year earlier, a company approached me to direct a conference for creative people. They wanted to pay me to do what I was passionate about. I got a great budget to work with, a fantastic team, a beautiful salary, and an office—everything I could have possibly asked for in a job.

I had just finished directing the first conference. Over 1,000 people attended. We had speakers like Donald Miller, Jon Acuff, Matt Chandler…some of the big names in Christian circles. And I was the guy who people saw making it happen. To me, the conference went perfectly and I couldn’t ask for a better role in the scheme of things. I was ready to hit the ground running on the next event.

And then my boss called me in for the talk.

I went through the usual gamut of emotions. I felt angry, then hurt, then anxious, then confused… It was a thirty-minute emotional roller coaster of a meeting. But the thing that dominated my mind the most was a fear of what others would think.

I was sure my professional life was over. Nobody would ever take my seriously again. I had reached what I thought was the pinnacle of my career, and I had failed miserably. I was sure people would see I wasn’t made for this sort of thing.

Over the next few days I processed the ordeal.

I got over the initial pain of getting fired. But I had a much harder time getting over my insecurity.

I felt shame. I didn’t want to tell anyone what had happened to me.

So what did I do? The only logical thing there was: I set myself up for more rejection. I sent an email to a publishing company with the manuscript for a book I’d been writing all year.

I was sure they would reject the book—especially if they found out what happened to me. (I was up front about the situation. I didn’t want to lie to anyone.) The crazy thing was; I got a positive response!

I’m about to release the product of this story—it’s a devotional to help people see their work and their world differently. And I’ve been amazed to see that the insecure voice inside my head that day I got fired was completely wrong. It lied to me and almost held me back.

I couldn’t see it in myself, but I had far more potential than I knew. No amount of failure could negate that potential. The only thing that could hurt me was letting my insecurity hold me back—fearing what others might think or fearing that I didn’t have what it took.

You do what you can do, and He’ll do what He can do. We can’t afford to let insecurity hold us back. It doesn’t matter how badly we’ve failed or what others say about us.

Murder that lying voice of insecurity.

I’d love to hear your thoughts. How has insecurity lied to you? What will you do to push through the insecurity and reach a life of significance?

Jonathan Malm is a creative entrepreneur and writer. He is the author of Created for More, a 30-day devotional to help you develop a more creative mind. You’ll find him in San Antonio, Texas, roasting his own coffee beans and enjoying life with his Argentine wife, Carolina.