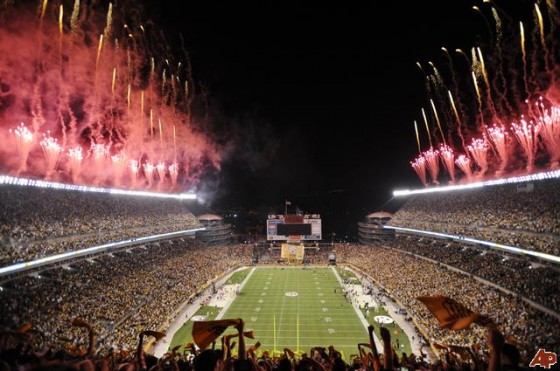 Have you read the cover story for the February issue of Christianity Today? It is a piece adapted from Shirl James Hoffman’s book Good Game: Christianity and the Culture of Sports.

The article covers a wide range of issues within the topic of sports and Christian faith, but I’ll focus on these specific areas quoted below:

“That some deep theological insights might be gleaned from such goings-on, or that God might choose to reveal himself in sports—even in those that bring out the crudest of instincts—is, of course, possible. But I believe it is unlikely. Yet even if I am wrong, this by itself doesn’t relieve Christians of the duty to seek the redemption of sports, and to point society toward a better way of playing.”

Hoffman goes up later in the article to help define the term “sportianity” which was first coined by Frank Deford.

“Sportianity is Christian theology vetted and co-opted by the dictates of the sports industry. Not surprisingly, it cannot speak truth to power. Its doctrines are promulgated far beyond the locker rooms of the NFL, the NBA, or Major League Baseball. Rationalized and systematized, it is vigorously taught to college, high school, and even younger athletes. Its themes crop up in sermons preached from evangelical pulpits and in articles from the religious press.”

“Evangelicals in the sports community have too often been followers rather than leaders, adopters of the dominant ethos rather than trendsetters who challenge it.”

And just so you can’t be mad at Hoffman for trying to get rid of the value of sports for Christian believers, he ends the article by saying this:

“I have never fallen out of love with sport. In fact, it is my love of sport that inspires my high view of its potential—a much higher view, I would argue, than is held by many who might think me a sport hater. Yet I suppose I have become a hater of what we’ve allowed sport to become, of the feeble uses to which we try to put it, of the ugly social contexts into which we insist on inserting it, and of its distortions and abuses. Most of all, I am disappointed that Christians have failed to wring from sport its full potential for underscoring that peculiar grace that they claim marks the life of the believer. But as to my love of the essence of the sport experience, there should be no doubt.”

I confess that I am what most would call a big time sports fanatic. I watch and follow sports almost every day and all through the year. There are few sports that I watch and become bored with. So this article hit me square between the eyes and forced me to at least think about my passion for following and engaging in sports and competition.

I also confess that while growing up and playing several competitive sports in high school, I competed in a completely un-Christlike manner. Sports for me were much more about how I performed than how I played (the difference being my attitude and my treatment of the other players).

However, I do believe that sports teach the values of hard-work, team-work, overcoming adversity (and many others), better than any other extra-curricular activity. These are qualities that must be taught and learned, they do not come ingrained within us. But I absolutely agree that we cannot justify teaching these values in order to value winning and performance in sport more. Rather we need to be teaching what it means to be a Christ-follower while engaging in competition with others.

Sadly the term “sportianity” isn’t far off from that way I have and others have treated sports…whether it be playing them or rooting for our favorite teams as they play. I hope for my sake, and for ours, that we can move beyond this while engaging in sports in a positive and influencing way.

What are your thoughts on the interaction between sports and Christianity?