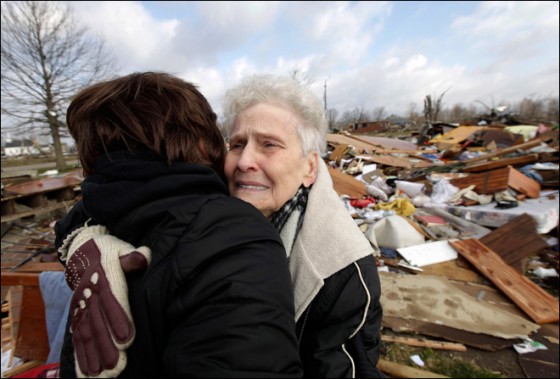 Earlier this week John Piper made some noise for declaring the tornadoes that ripped through so much of the Midwest and Southeast last Friday to be God’s sovereign finger of judgment. Here’s some snippets of what Piper had to say (you can read his whole post here):

If God has a quarrel with America, wouldn’t Washington, D.C., or Las Vegas, or Minneapolis, or Hollywood be a more likely place to show his displeasure?

We do not ascribe such independent power to Mother Nature or to the devil. God alone has the last say in where and how the wind blows. If a tornado twists at 175 miles an hour and stays on the ground like a massive lawnmower for 50 miles, God gave the command.

God’s will for America under his mighty hand, is that every Christian, every Jew, every Muslim, every person of every religion or non-religion, turn from sin and come to Jesus Christ for forgiveness and eternal life. Jesus rules the wind. The tornadoes were his.

I’ve seen one and only one reaction to Piper’s remarks: Absolute disgust.

Similarly, Pat Robertson came out yesterday saying that if people would have prayed more, they could have been spared of the tornado’s wrath.

Part of the irony of it all is that Minneapolis was hit by a tornado 2 years ago, just a few days before I traveled there to visit family. Piper blamed that tornado on the ongoing conversation with a Lutheran denomination over homosexuality.

In a similar vein to Pat Robertson with Haiti and Jerry Falwell with Hurricane Katrina, it seems Piper wants to declare God’s intent behind the natural disasters that happen day after day on earth.

But really what’s the other option other than saying that God was behind all this? Should we blame pure happenstance? Is this Satan trying to gain control in our world? Those of us with a faith in God, have to, in some way, declare that He is a sovereign God. Christians do not believe in a God who created a world, set it in motion, and gave a blind eye to everything that happened moving forward. No, God stepped into history, in the form of a person. So clearly, God is His sovereign power, cares about us enough to step into our lives in a full sense.

(If you’re interested in this topic of God’s sovereignty, check out this great blog series on the topic)

On some level we can agree that either God was actively apart of this tornado taking shape or he was actively involved by allowing it to happen.

I’m not advocating for us trying to declare God’s reasoning behind every action or inaction that takes place in our lives. To me, that is foolish. It seems clear to me that from Scripture that rain falls on the righteous and unrighteous.

I don’t want to spend time debating whether Piper was right or wrong with what he did. That’s been done all over the place and I’ve yet to meet anyone who completely agrees with him.

What I want to discuss is this disagreement with Piper declaring God’s sovereignty to be apart of those tornadoes.

If it isn’t God, who is behind these incredible forces of nature?

Why do they happen? Is it all just a mystery to you?

What conclusions do you come to as you wrestle with this tough subject?