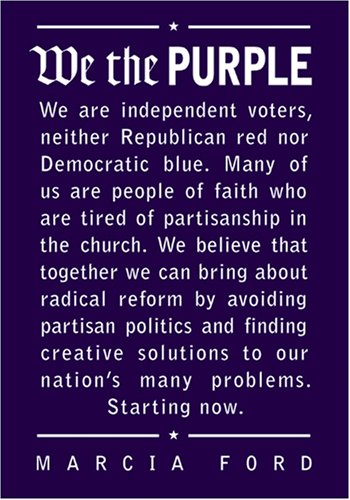 When most people think of independent voters they think of people who are undecided, wavering, and unsure of what they believe. Marcia Ford’s book, We the Purple seeks to dispel this notion and to support and advocate for Christians being independent voters.

Despite being inclined to agree with Ford, I think she did an excellent job of viewing independent voters from both a Republican and Democrat side. And, she does not shy away from the key issues for many Christians and how she sees them as an independent voter.

I also love that she is just an everyday person with little to no ties to Washington or any lobbyist group. Ford is just one Christian woman who has decided to write a book on a political movement that makes sense for her. If you want to understand the changes in politics today…read the book.

I enjoyed the book enough to want to dive into some of the subjects that Ford brings up in her. It is not my goal to push her views or my thoughts so that you might agree with me or her. I would much prefer this be informative, conversation starting, and community building. My hope and prayer is that we can work through the difficulty that faith and politics is.

I first want to look at Ford’s introduction to independent voters.

What are some of the key issues to independent voters:

Check out Marcia Ford’s blog and a blog she wrote specifically on this book.

Any of these resonate with you?