From Tyler: Today’s post is from an author and writer you definitely should be reading, Josh Riebock. Be sure to check out some of his work after you read this great post. If you’d like to write a guest post for this blog, get more info here. 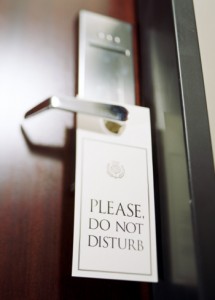 My hotel room is the way it is because I wouldn’t let the housekeeping crew come inside. Earlier this afternoon, I ignored their knuckles tapping on the door, so this place is a bit of a mess. Last night’s room service tray sits on the counter, a crumbled napkin, warm orange juice, a gunshot wound of dried red ketchup in the center of a dinner plate. The white bed sheets are twisted up around my feet, a pillow flung limp on the floor beside two damp towels. The heavy drapes cover the windows, ousting natural light, the world. The door is locked. Do not disturb. That sign hangs around the doorknob. It hangs around my neck. I want to be alone. But I don’t want to be lonely. Is that possible? I’m still in my sweats, still in bed, trying to do some writing, the noise of television heads talking in the background. My phone rings a few times, but I don’t answer it. I keep trying to write but I’m distracted and not getting much done. I’m thinking about my friends, thinking about my wife. I miss them. I want to know that they miss me, because if nobody misses me, then how can I possibly be spending my life well?

I give up on the writing, set my laptop aside, and begin to pray. I can’t feel people right now, but maybe I can feel God. I want to feel him. I need his company. So I ask him to let me feel him, to press his presence onto my skin. Sometimes asking for this helps. Other times it doesn’t seem to help at all, annoys me, only leaves me feeling more alone than I felt before. Still, I ask.

Will you let me feel you?

The words leave my mouth and then I wait, but the windows don’t shake and a glowing light doesn’t appear and I’m not filled with an indescribable peace or sense of life purpose. I feel the same as I did. I wait another moment. Then I lean back against the headboard and though I don’t feel him, I talk to God anyway. I talk about nothing, about everything, about things that don’t matter and some things that do matter, and I’m pretty sure He’s listening, yes, somehow, I’m sure He’s here. Is he? Yes, and now I feel him. He feels good. Then He talks. Does he? Yes. Inside me, his voice is stirring, whistling quiet and cool over my bones and organs. He says that it’s time for me to come further in. Further into him. He wants us to be closer, and for some reason I start to cry, and I’m relieved that the drapes are pulled tight, that the walls of my hotel room are thicker than paper because this way no one can see me or hear me. I roll over, still crying, the pillowcase collecting my tears, soaking up my falling emotions, pieces of me fading into the fabric—of course I know that I wanted to hear from him, but I didn’t want to hear this. I want to stop listening now, but through my faint sniffles, I decide to continue, hoping that maybe if I listen for long enough He’ll begin to say something different, something easier, something that doesn’t make me so afraid—few things are as frightening as depth. And that’s exactly what He’s offering. So I listen, hoping that He’ll retract his previous statement, but instead He says the same thing, again He tells that it’s time to come closer…but I’m just not sure I can do that.

Intimacy requires courage that I don’t seem to possess—

Can’t we just keep things the way they are? After all, we know each other. Our relationship is wonderful and frustrating and meaningful and I mostly like it, so what’s so bad about things staying the same? Aren’t we close enough? Why does He want to be closer? Huh? Why? I ask God all of this. I try to collect myself. Then I tell him that I’m afraid of what moving closer to him will do to me. Will he make me into something that I don’t want to become? Will becoming closer with him hurt more than it will heal? I tell him I’m afraid that if I come closer, step further into him, and invite him into more of me, that he’ll no longer want me. Sometimes I think that He only loves me because He doesn’t know me, and if he did know me, really knew me, well, then things would be different. I feel that way about a number of my relationships. I tell him this—

Can I be both with you? This is what I ask God.

The next few hours pass with me still swimming in the white pool of hotel bed sheets, still weighing the wonder of this unending invitation to move deeper into the heart of God, to allow him to move further into mine, and about what that can do to a person. And through it all, the front door remains locked, but as the sun begins to set, it feels as though it’s time to take the Do Not Disturb sign down, to open the drapes too, and let a little more light into this place.

Josh Riebock lives in Texas with his wife and dog. He’s the author of Heroes and Monsters and My Generation. He loves 80s music. He doesn’t think TV is evil. He once got a really bad tattoo and he sometimes tells the truth. You can visit him at www.joshriebock.com.