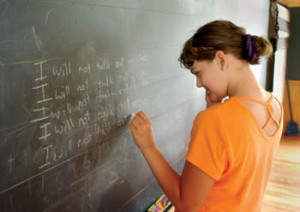 After two months of the ongoing blog series on discipleship, I’d like to summarize what stood out to me. I’m also curious what themes, ideas, and posts connected most with you as well. Share some of your own thoughts in the comments.

The biggest thing that stuck out to me was this: discipleship is something that takes a concerted effort and also simply an outcome of following Jesus.

Somehow discipleship just happens, we can’t stop it. And yet, we have to start it. It’s a both, and, not an either, or.

Too many wait for discipleship to only be the natural outcome of following Jesus and they make no effort. The flip side to this is how many others try so hard that they never stop to simply follow Jesus, letting His work within become the outcome.

Here’s a few quotes from the series that I think honed in on this idea:

“Discipleship is nothing more than an ardent following. It is a learning that follows in the proverbial footsteps of another. It is intentional, while possibly not terribly thought-out and planned. In other words, we enact discipleship all of the time.” Jenelle D’Alessandro

“Simple acts can create profound and meaningful contexts for discipleship. Instead of trying to out innovate each other, maybe we simply need to commit to spending more quality time with people, creating space for conversation and observation.” Stephen Boutry

“Today’s culture is more about ‘scattering it around’ than ‘handing it down’. We’ll tweet. We’ll email and text. We’ll worship. We’ll give. We’ll pray. We’ll read and study. We’ll go on mac-mission trips and scatter old clothes and the Good News. We’ll group up and even get passionate behind good causes. But who’s handing it down?” Regi Campbell

“Jesus asks much of his disciples. His teachings are deep, wide, and often hard. And they are the source of life. They are the directions we need on what to imitate and how to do it well. His teachings are the words we should quote, explain, and defend. To be a disciple is to sit under the teachings of Jesus, his living words, day by day. If we seek to follow him without being willing to do this we are not disciples at all but mere fanboys.” Barnabas Piper

To be a disciple you must be discipled, by Jesus first. Discipleship of others flows from being ministered to by the Discipler. It’s His work that allows us to then work in others.

Jesus did not send out his closest followers until they had first been with him for many years. He built into them so that they could begin to share his message with many.

Discipleship isn’t a program, a church focus, or a goal every Christian should have.

Discipleship is an outcome of being a disciple first.

That’s my takeaway from the past 2 months.