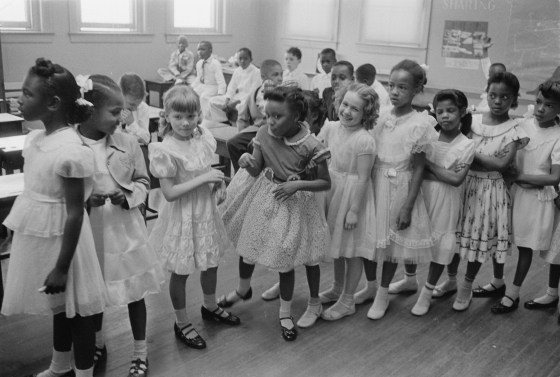 Recently This American Life released two episodes surrounding Ferguson, Michael Brown, and integration within the American education system. Despite the charged issues, the producers created the kind of episode worth listening to: prompting more questions, wondering where you might fit within progression for all sides.

At the heart of the episodes was the question of why American school districts gave up on the integration focus of the 70s and 80s. Test scores from these periods in history show quite clearly, integration worked. Why? How? A journalist interviewed as part of the episode had this to say:

“It is not that something magical happens when black kids sit in a classroom next to white kids. It’s not that suddenly a switch turns on and they get intelligence, or wanting the desire to learn when they’re with white kids. What integration does is it gets black kids in the same facilities as white kids. And therefore, it gets them access to the same things that those kids get—quality teachers and quality instruction.”

The audio from the parent meeting is heartbreaking. Here were just a couple parent statements that were met with loud cheering:

“I shopped for a school district. I deserve to not have to worry about my children getting stabbed, or taking a drug, or getting robbed because that’s the issue.”

On the one hand, I get it, and you probably do too.

Why should students in a great school district be forced to go to school with students from a poorly performing district? Despite studies showing the success this brings for the students coming from the poor situation, someone has to pay a price it would seem.

But it’s heartbreaking, even still.

The whole time listening to the parent meeting, my skin crawling, wanting to scream…

Where are the people of Christlike faith?

It’s not as if the question of “who is willing to sacrifice their own supposed wellbeing for the sake of another?” is easy to answer. But for people of faith, it should be. Full stop.

Consider the words of Jesus:

What is your life? You are a mist that appears for a little while and then vanishes. Instead, you ought to say, “If it is the Lord’s will, we will live and do this or that.” James 4:14-15

The questions in my head are right along the lines of what Sharon Hodde Miller asked in her piece responding to the episodes. I’ll leave you with Sharon’s questions, which are well worth considering: