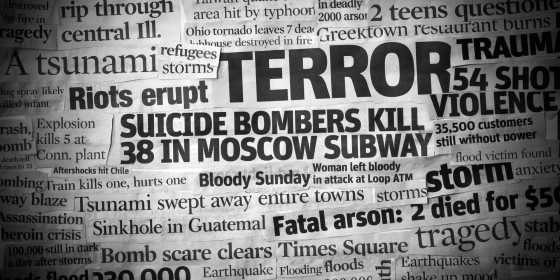 Last week as news headlines were again gripped by terror—the new normal in today’s world—I began to wonder why Christians seem to react the same as everyone else: fight for your rights, demonize the supposed enemy, declare war on anyone who disagrees with you. These reactions, based completely on fear, define who we are as people: no longer moving in a direction, instead, only responding through the fear of external forces around us.

You cannot live today without being shaken by the realities of terrorism. It may not have hit your neighborhood, but it has hit a neighborhood just like yours. Though shaken, how will you respond? Where will be your focus?

This moves far beyond terrorism. You must simply be alive to have been shaken. Cancer. Divorce. Death. To be alive is to be thrown in a blender, the scars of the blade are the inevitable reality. But how will you respond?

In 1944, within Nazi prison walls due to his involvement in a Hitler resistance movement, a Jesuit priest examined the state of his country Germany, and penned these words about being shaken and responding during Advent. I find them highly instructive for us today.

“If we want to transform life again, if Advent is truly to come again…then the great Advent question for us is whether we come out of these convulsions with this determination: yes, arise! It is time to awaken from sleep. It is time for a waking to begin somewhere. It is time to put things back where God the Lord put them.

The world today needs people who have been shaken by ultimate calamities and emerged from them with the knowledge and awareness that those who look to the Lord will still be preserved by him, even if they are hounded from the earth” (emphasis mine, Alfred Delp, from the compilation book When the Time Was Fulfilled).

Alfred’s words over 70 years ago remind me of the encouragement the prophet Isaiah gave to his people, a text often understood as a Messianic prophecy.

The hope of Advent, despite its seemingly unending waiting, is that these scars are not the end of the story. And these calamities, though they shake and quake us to our knees, provide the foreground for God to make possible all the impossibilities.

No longer will violence be heard in your land,
nor ruin or destruction within your borders,
but you will call your walls Salvation
and your gates Praise.
The sun will no more be your light by day,
nor will the brightness of the moon shine on you,
for the Lord will be your everlasting light,
and your God will be your glory.

Though shaken, may your foundation be The Unshakeable One. Though beaten down, may you rise again looking to the One who will deliver.

If you’re looking for more Advent resources, check out this helpful post.