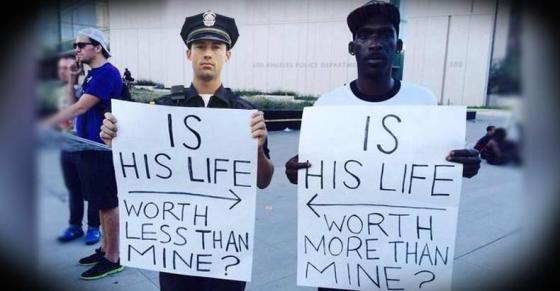 This is my attempt to cut through the noise.

Let me first acknowledge that I have little to no ability to claim experiential authority on this subject. I am a 31-year-old white male (I wrote about white privilege 2 years ago), married with kids, living in a predominantly white city. When it comes to the plight of what our culture sees as discriminated people, I miss the boat. Instead, I share my thoughts as a pastor, and as someone who wants to provide a better way forward in the midst of our racial division.

This kind of division is nothing new. The New Testament gives lots of coverage to the division between Jews and gentiles, both during the earthly ministry of Jesus, and even after his ascension. This division had a title, “The Dividing Wall of Hostility.” It refers to a specific place within the Temple courts in 1st century Jerusalem, which then symbolically represented the division within society as a whole for Jews and gentiles.

Archaeologists found something connected to the outer courts of the Jerusalem temple, inscribed with the words: “Whoever is captured past this point will have himself to blame for his subsequent death.” Meaning gentiles who went beyond that outer court would be killed. This was the kind of relationship Jews had with gentiles. Divided.

What has Jesus done to this dividing wall? Paul explains:

But now in Christ Jesus you who once were far off have been brought near by the blood of Christ. For he himself is our peace, who has made us both one and has broken down in his flesh the dividing wall of hostility by abolishing the law of commandments expressed in ordinances, that he might create in himself one new man in place of the two, so making peace, and might reconcile us both to God in one body through the cross, thereby killing the hostility. Ephesians 3:13-16

Through Christ, we are offered reconciliation both with God and mankind. In him, we are one.

Throughout the book of Acts the apostles had difficulty knowing how to bring Jews and gentiles together into the body of Christ, as one. Early in Acts the church was one only in principle, never in practice. At first, they thought all gentiles had to become like Jews, but ultimately they decided that the body of Christ could be unified while having diversity. Their principle of reconciliation and oneness became their practice through intentional effort.

Exactly, So Don’t All Lives Matter?

Yes, of course, all lives matter. But what does saying that accomplish other than stating the obvious? Mike Erre made the point that within the human body all your bones matter. But the broken bone matters most. You care for the broken bone. You give it more attention and focus.

So too with matters of race, those who are broken deserve care—they deserve more attention and focus. Why? Because they are broken. In recent weeks the black community and other minority races have voiced their pain and frustration. When the response is #alllivesmatter or #bluelivesmatter you have stated you would rather not listen.

Movements like #Alllivesmatter and #bluelivesmatter silence those who spoke up first saying #blacklivesmatter.

Now I know many of you have used #alllivesmatter and #bluelivesmatter and I know that in nearly every instance you are doing so to try to bring unity. I’m not judging you. I’m encouraging you to think of this from a black man’s or woman’s perspective. This doesn’t mean you support everything related to the #blacklivesmatter movement, but it does mean you choose to value and listen to the broken and the hurting because God does.

In speaking to his church, Matt Chandler had this to say about race and the division of it:

When we fight for deep relationships with those we are tempted to view as racially divided from us, humility results on both sides. We learn to value differences and to recognize how much we have in common as children of the same God. And we cease trying to rebuild walls that have been crushed to dust by the peacemaking work of Christ, by which many are made one.

#Blacklivesmatter is most often a cry of lament from generations of oppression. By linking arms with those who mourn, we put into practice the hard fought oneness Christ desires of his people.

Wondering what you could do next? Here’s a few helpful things I’ve read: