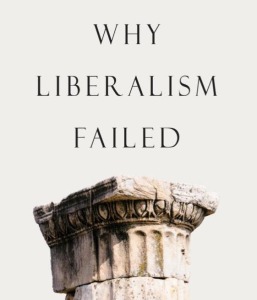 I recently finished reading Why Liberalism Failed by Patrick Deneen. The book came highly recommended by several for understanding our current times. I found it provocative, timely, and necessary for people all on sides of the political and economic spectrum.

Despite what you might assume from the title, this is not a pro-conservatism or pro-Republican party book. It looks at liberalism as an ideology, which both political spectrums embrace to a point.

Deneen’s assessment, though critical, is quite accurate in regards to many aspects of life in liberal societies. His points regarding the environment and economy were especially strong, as the bill from living outside our means continues to get passed to each successive generation. Eventually, it all falls apart.

His short, but helpful encouragements of how we overcome this failure are focused on the importance of locality, place, and community bonds. I believe the local church is set up to uniquely meet this need.

And if you’re wondering, posting this on the same day as the mid-term elections of 2018 is 100% purposeful.

Here’s my list of the best 13 quotes from the book (in no particular order):

“How many of us can sit for an hour reading a book or simple thinking or meditating without an addict’s longing for just a hit of the cell phone, that craving that won’t allow us to think or concentrate or reflect until we’ve had our hit? The same technology that is supposed to connect us more extensively and intimately is making us more lonely, more apart” (15).

“The Greeks especially regarded self-government as a continuity from the individual to the polity, with the realization of either only possible if the virtues of temperance, wisdom, moderation, and justice were to be mutually sustained and fostered” (22).

“Among the greatest challenges facing humanity is the ability to survive progress” (29).

“Individualism and statism advance together, always mutually supportive, and always at the expense of lived and vital relations that stand in contrast to both the starkness of the autonomous individual and the abstraction of our membership in the state” (46).

“For liberal theory, while the individual ‘creates’ the state through the social contract, in a practical sense, the liberal state ‘creates’ the individual by providing the conditions for the expansion of liberty, increasingly defined as the capacity of humans to expand their mastery over circumstance” (49).

“Preserved in discrete human inheritances—arts, literature, music, architecture, history, law, religion—culture expands the human experience of time, making both the past and the future present to creatures who otherwise experience only the present moment” (77).

“Liberation from the confinements and limitations of local market cultures brings not perfect liberty but the expansion of Leviathan. The destruction of culture achieves not liberation but powerlessness and bondage” (87).

“We need to understand that ever-expanding individual liberty is actually the creation of a sprawling and intricate set of technologies that, while liberating the individual from the limitations of both nature and obligation, leave us feeling increasingly powerless, voiceless, alone—and unfree” (108).

“We have endless choices of the kind of car to drive but few options over whether we will spend large parts of our lives in soul-deadening boredom within them” (186).

“Elections provide the appearance of self-governance but mainly function to satiate any residual civic impulse before we return to our lives as employees and consumers” (195).

“Perhaps there is another way, starting with efforts of people of goodwill to form distinctive countercultural communities in ways distinct from the deracinated and depersonalized form of life that liberalism seems above all to foster” (197).

“What we need today are practices fostered in local settings, focused on the creation of new and viable cultures, economics grounded in virtuosity within households, and the creation of a civic polis life. Not better theory, but better practices” (197).