Over the next few weeks I’m going to post several things connected to Ronald Rolheiser’s important book Sacred Fire. I had been told by several it’s an especially helpful book for people in their 30s and 40s, and since I fall into that category I gave it a shot. Turns out my friends were right. With most of my generation either well within this stage or just beginning it, it was a timely read. 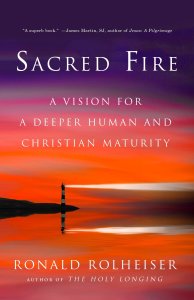 The book as a whole is focused on what he describes as the 2nd stage of discipleship to Jesus, or as he calls it more specifically, “mature discipleship.” The defining question of this stage in life and spirituality is simply, how do I give my life away more generously? While the previous stage is focused on things more self-oriented, this 2nd stage is defined by giving your life away toward something.

Rolheiser describes this stage by saying, “The question that drives our lives and our energies needs to be focused beyond ourselves and beyond our own struggle for identity, meaning, and comfort.” Certainly the desire for meaning and purpose will always exist, but now this drive for significance extends beyond your own singular life, to that of others.

With this 2nd stage of discipleship in view, I want to highlight a few aspects specific to this stage from Rolheiser’s work in the book: two pitfalls, the difficulty of the season, and what kind of fuel is needed to keep moving forward.

What gets in the way of being able to give your life away generously? Let’s begin this short series with one of the more obvious pitfalls to the stage of mature discipleship.

Inherent to any stage of life connected to maturity is the willingness to embrace yourself as mature compared to others. At this point we can struggle to relate to and have empathy toward those who are struggling emotionally, morally, or spiritually. Rolheiser says, “Pride in the mature person takes the form of refusing to be small before God and refusing to recognize properly interconnection with others. It is a refusal to accept our own poverty” (pg. 84).

The temptation is to distance yourself from those who don’t match your level of maturity, missing out on the fact that where you’ve arrived in life is through the grace of God, not of your own doing. You could not arrive at your current state without the influence of both those who are more and less mature than you now. Convincing yourself of approaching godliness in isolation is pride. But the temptation toward pride goes beyond just a comparison to others or isolation from others.

One of the benefits of being at this mature stage of life is that you recognize pride as a negative in your life. You try to squelch out the thoughts or desires that prop yourself above others. Though you may struggle to truly master avoiding the sin of pride, the battle is not over.

By this 2nd stage of life we have often mastered how to NOT come across as prideful, to instead put out a faux humility. We’ll embrace being last, but only as a tactic for ultimately gaining recognition and admiration down the line. In one instance, pride is overconfidence in what you have accomplished for yourself, but pride can also show itself through a passivity so as to come across as humble.

What I have found is that by embracing this 2nd stage of life as one to give your away, the battle of sticking with a more others-centered outlook on life helps push you away from arrogance toward humility. You can’t survive in this stage through image management or by isolating yourself.