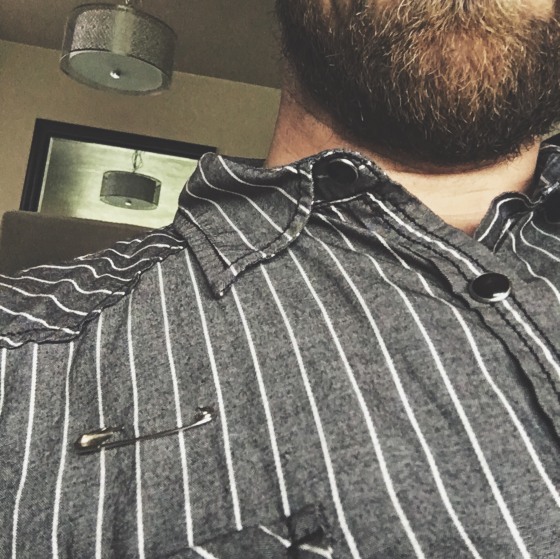 This past Sunday I wore a safety pin during my sermon at my fairly conservative, mostly white, evangelical church. I share those details because approximately 81% of people in that demographic of Americans voted for Donald Trump (though, here’s a well-informed read on why that number is very misleading).

Those of you who have been around this space over the past year know I’ve been decidedly against the Christian evangelical support of Trump (HERE and HERE and HERE, mostly notably).

I lamented to my wife on election night that in 4 years I would need to explain to our then 6-year-old daughter how Americans could have chosen Trump to lead them. The things he’s said about women are disgusting at best, and probably don’t make a list of the worst things he’s said or done. I’m no closer to being able to explain that to my daughter today than I was a week ago.

So why wear a safety pin? Trump has been elected. Time to move on and give him my full support, many have said.

What’s the Safety Pin For?

Before I share my reasons, here’s some background on how this whole safety pin thing started.

The safety pin movement started following Brexit, as a way to declare to refugees and immigrants that they did not need to live in fear around those wearing the pins. The New York Times summarized safety pin accessory wearing by saying, “Groups of people across America are attaching safety pins to their lapels, shirts and dresses to signify that they are linked, willing to stand up for the vulnerable.”

My wife Rose had a client of hers share her fear of the coming Trump Presidency, not because she feared him persay—she had fear for the normalization of what he stood for throughout this campaign. He has spoken in such disparaging terms about some of the most vulnerable groups in society: people of color, immigrants, women, people with special needs, to name a few. This particular client of Rose’s finds herself in one of those vulnerable groups of our society.

Sticking it to Trump Supporters?

After hearing of Rose’s client’s fear I decided to wear the pin. What if this woman showed up to my church on Sunday, thinking that people like me stand with Trump on everything? I could not stand for that.

Those of you who know me well know that I am not a “do something to make a point” guy. I drive a boring car. I wear boring clothes. So I waffled about this, knowing some would see the pin and think I was just trying to cause a commotion.

I shared the idea with some friends ahead of time, and one wisely asked, are you doing this to stick it to Trump supporters? While I disagree with supporting Trump, I came to the decision to wear the pin because I believed I was standing up for the vulnerable, not trying to stick it to any particular person or group.

In order for common ground to be found, even the person who leans toward the conservative side of governance (as I do) must point out when it is in error. My worry is that by Trump winning, many will believe it validates his methods and messages.

When asked if Trump wishes he could take back any of his campaign blunders he responded by saying, “I won.” Normalizing hate of people groups does not advance a society. If the KKK celebrates your victory, it should bring pause, not validation.

Wearing a safety pin (for me) was not standing on the left, sticking it to those on the right. I wore a safety pin to say there’s something wrong with normalizing the kind of behavior and rhetoric the President-elect has led with, and he does not speak for me.

As I said two weeks ago, the way forward for our society is by humanizing “the other” instead of dismissing them. Certainly many have sought to divide in recent days, and while I recognize my safety pin wearing could be seen as divisive by some, I hope it brings about a helpful conversation while discouraging the normalization of hate-filled speech of any person or group.

To the Trump Supporter: Please choose to value those who feel like their voice has been diminished in this election. Don’t let political activism get in the way of Christian mission.

To the Trump Opposer: Don’t just wear a pin, anyone can be a slacktivist. Listen to those who voted for Trump. They aren’t the evil you might assume.